Maybe it's not totally Kyle Kendrick's fault. When you get to watch Roy Halladay, Cliff Lee and Cole Hamels three days out of every five, you're going to cast a jaundiced eye on the performance of lesser pitchers. And Kendrick, for all the ugliness of how he gets it done, now boasts a 40-28 career record in the major leagues.

Which isn't to say it's fun to watch. Just in the first three innings, Kendrick surrendered four hits, including two doubles, plus two walks, and the Mets had runners in scoring position each frame. Yet none of them came across, as Kendrick twice added to Jason Bay's nightmares by twice inducing New York's $70 million mistake to ground out, ending the first and third innings. (Bay finished 0 for 4 and dropped a Ryan Howard fly ball that began what turned into a three-run Phillies inning in the eighth.) Kendrick then retired nine of the next ten batters, finally allowing one run in the seventh inning before departing with a 5-1 lead. Kendrick threw 109 pitches, allowing six hits (three doubles) and three walks; he registered zero strikeouts. For his career, Kendrick has an ERA around 3 against the Mets in 13 games despite having more walks than Ks.

He won this one thanks largely to the single most unlikely thing I've seen this season: Michael Martinez homering at Citi Field. With the Phils leading 1-0 in the fifth, Mini-Mart came to the plate after back-to-back singles from Kendrick (who had two hits on the day) and Jimmy Rollins. He got ahead of Mike Pelfrey, then slammed a hanger just over the wall in right field to stretch the lead to 4-0. Martinez added a sac fly two innings later to make it 5-0.

After the Phillies seemingly put the game away with three runs in the top of the eighth on a bases-loaded walk to Ross Gload and a two-run single from Rollins, the bullpen made it a game again with a performance that had Phillies fans pining for Kendrick. Juan Perez restored a degree of cosmic balance after his immaculate inning shortly before the all-star break by walking the first three Mets in the bottom of the eighth. Ryan Madson seemed to douse the threat by getting a double play from Lucas Duda, the first man he faced, but then surrendered an RBI single to Ronnie Paulino that made it 8-3, hit Ruben Tejada with a pitch, walked Nick Evans to reload the bases, and gave up an RBI single to Angel Pagan. With the score 8-4 and Jason Turner at the plate representing the tying run, Madson gave way to Antonio Bastardo--who finally registered the Phillies' first strikeout of the day, after seven walks, to end the rally.

Bastardo saw the epic 0 for 39 he'd put up against opposing hitters end in the ninth, as Daniel Murphy doubled after a long at-bat and came in two batters later on Duda's triple. But Martinez made a fine play on Paulino's grounder to end it, and the Phillies had their seventh straight series win.

Now, let us never speak of this game again. 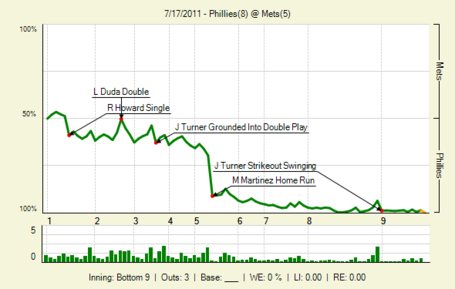