Well, baseball is funny, turns out I was right. One-time Phillies pitcher Rodrigo Lopez stifled his old team, and Roy Halladay didn't even make it past the fifth inning on a sweltering Chicago evening, leaving tonight's game due to heat-related symptoms, as the Cubs whooped up on the Phillies by a score of 6-1.

Halladay was visibly affected by the heat from the beginning of the game. The Cubs jumped out to a quick 1-0 lead on a solo home run from Aramis Ramirez in the bottom of the first inning. The defending Cy Young Award winner was suffering in the dugout, trying to cool down with wet towels and eventually removing his undershirt after the second inning. Finally, after allowing a leadoff single to Starlin Castro in the fifth, Rich Dubee and the training staff finally had mercy on the clearly ailing right-hander. Halladay would finish the night with seven hits and three runs allowed in four-plus innings, with one strikeout and one walk.

Drew Carpenter and David Herndon were far from sharp themselves, allowing three additional runs in four innings, but it hardly mattered thanks to the Phillies offensive output. The Phillies' sole run scored on a solo home run to lead off the fourth from Jimmy Rollins, the Phillies' first hit of the game.

The game was marked by poor approaches at the plate up and down the lineup, including a first and second, one out situation in the sixth with Ryan Howard and Raul Ibanez due up. With the score still just 3-1, a run or two would have been huge. After getting ahead 2-0, Howard flailed at two pitches, and eventually popped out to center. Ibanez would strike out swinging on a pitch above his head. 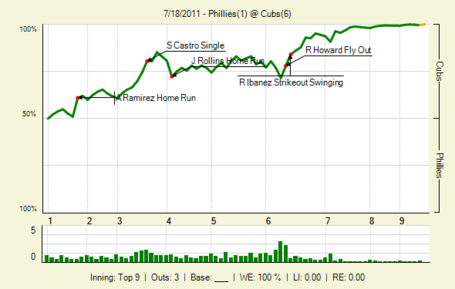