The Phillies took advantage of a tiring Matt Garza and an erratic Cubs bullpen, overcoming a putrid start to the game to come from behind to beat the Cubs by a score of 4-2.

The Cubs jumped out to a 2-0 lead off Cliff Lee before the All-Star lefty could record a single out, on a leadoff double and a two-run homer from Starlin Castro. That would be all the Cubs would score, despite a first and third, no out situation in the second, after which Lee would strike out the side. Early struggles aside, Lee wound up posting a solid line, allowing just the two runs on eight hits, with no walks and six strikeouts in six innings. Lee would depart with only 89 pitches thrown, lifted for pinch hitter Ross Gload in the top of the seventh with two runners on and two outs. Gload would fly out to left-center.

Cubs starter Matt Garza dominated for the game's first six innings. The Phillies first hit came on a double from Domonic Brown in the fifth inning. The Phillies would not get another hit until the seventh, when Brown would collect a single. Things started to fall apart for Garza in the eighth, after allowing a leadoff single to Rollins, Garza was lifted for Sean Marshall, who would allow a single to Michael Martinez, and a two-RBI double to Chase Utley to tie the game at two runs apiece. Utley would steal third and would be thrown out at home on a fielder's choice grounder off the bat of Shane Victorino.

In the top of the ninth, things looked bleak for the Phillies after Marshall got the first two hitters out, John Mayberry on a grounder to short, and Ruiz on a strikeout. Pinch-hitter Ben Francisco proceeded to single, as did Jimmy Rollins after him. Both would score on a bloop double to right from 2012 All-Star Michael Martinez.

Antonio Bastardo got back on track, striking out the side in order for his seventh save. 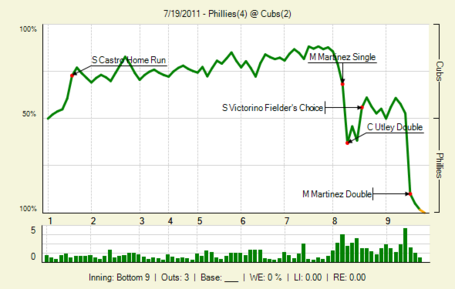