Toronto Cultural Field Guide, or: My Brief Fling with Another Team, Another City

Share All sharing options for: Toronto Cultural Field Guide, or: My Brief Fling with Another Team, Another City 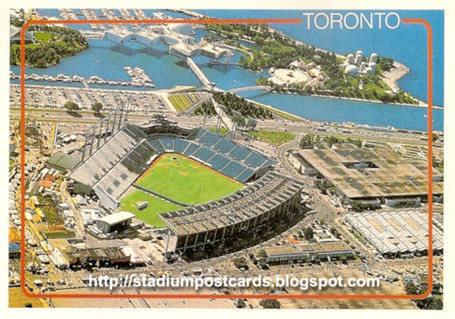 For the life of me, I don't know how that trip to Toronto came about.

In the still middle of the summer of 1985, I, a newly minted high school graduate, was about to depart for a few years to the greater Michiana area. In all respects, these were in-between days. As for the Phillies, the franchise was then in its third year of careering wildly off its peak at the start of the decade, and my friend Brian was just getting me hep to why all these Bill Giles-influenced moves weren't working out.

So there was increasingly little to see here, and so I experimented by adopting an AL team. For me, it was the Toronto Blue Jays, on the basis mostly of my affinity for their old logo and a vague sense that they were doing things really right, going from expansion laughingstock to AL East power in a mere seven years. Brian saw my interest and turned me on, sabremetrically speaking, with the fascinating story of George Bell, who by 1985 was mashing in a quasi-Bautista-like way, a fearsome hitter and, given his Canadian location, an angry poor man's Andre Dawson.

Did you realize, he asked, that Bell was part of the Phillies organization? And indeed, while most commentary about that era points to the Phillies' abandonment of guys like Ryne Sandberg and Julio Franco, Bell may be an even better example of the Phillies' woeful misunderstanding of the dynasty they might have been throughout the 1980s. Bell was rule 5 draftee a mere six weeks after the Phillies won the World Series in 1980, after, at the age of 20, throwing up a .309/.345/.473 line in Reading. By way of comparison for you young folk, Jonathan Singleton is on pace to do this. And, my blog handle homage aside, it wasn't really as if the Phillies had anything special in left field, although, and perhaps to be fair, no one could have possibly foreseen Lonnie Smith's cocaine addiction. Some years later, the Phillies reminded us of this piece of organizational boneheadedness by employing George's less-talented brother, an organizational specialty.

But I digress.  This was supposed to be about Toronto.

Yes, yes, a lovely city, wondrous to behold. Really nice in the summertime, and not quite as bad as you'd imagine in the winter. It boasts an extensive and eerily clean public transit system  that figured out a way to keep their streetcars without ripping up the lines or enduring the same level of stupidity when sharing the streetscape with cars (I'm looking at you, Septa). Indeed, they've even expanded them. It has a low crime rate with a wildly diverse population, some provocative architecture, landmark comedians, and fine universities. For cinemaphiles, there is no better location that all too often, and regrettably, disguises itself as someplace else. (h/t David S. Cohen; please be sure to read the comments)

And therein, mystifyingly, lies the problem of Toronto. It is the psychic capital of a country with a vast inferiority complex, and as such continually tries, and oftentimes succeeds, in pulling off this odd idea of the postwar North American city. The strange thing is that when you visit and marvel at things your own city can't seem to ever get right - infrastructural, multicultural, educational - whatever - upon your return home somehow these intangibles, once unpacked, are like so many pairs of maple leaf'd Mickey Mouse ears. Rather than blame our own feet for the faults of our shoes, Americans prefer to delight in simply blaming Canada. Perhaps when the time comes when our national leaders dress up in outsized costumes and run around for our amusement, we might actively consider such things as single-payer health care, pronouceable question marks, gun control, parliamentary-style democracy (or at the very least a viable third party), bi-lingual signage, and progressive tax rates. Your politics may vary, but I ask you: Why does Toronto work so well?
* * *
My trip to Toronto, at this stage of my life, is a bit of a blur. I was invited up there by Jill, a high school friend of mine, who, well, just so happened to be dating my friend Cody, who was away in Cape Cod for the summer. Some mildly fraught, awkward discussions (and letters! remember them?) ensued, but in the end, we went. Jill's parents were divorced, and her dad lived in Toronto in a nice turn-of-the-century house in an inner ring neighborhood. Jill's dad was a pilot, so he brought us along on a flight over Niagra Falls, which was as spectacular as you'd imagine. Jill and I rode bikes all over the city and along the trails next to Lake Ontario. Most other details elude me. We spaced out the cat on catnip.
Oh, and I saw a baseball game at Exhibition Stadium in 1985. We went by streetcar, I'm pretty sure, and I dived into the merchandise, buying a shirt, hat, and a button which read,  "Hang on Blue Jays."  We sat along the first base line, which had a nice view of the makeshift right field fence that ran roughly parallel to the 30 yard line on the Argonauts' field. Without an upper deck, it had a wide open feel to it compared to the Vet, and may have been the first major league venue outside of the Vet I ever saw. I can't remember who they played, though it was probably one of those games in the July homestand.
My Blue Jays' fandom was more artifice than anything. While I certainly admired their players, like Jesse Barfield and Dave Stieb, and little did I know that this was where I would begin my long strange trip with one Robert Cox, that team in retrospect wound up epitomizing the childhood hearbreak I endured as a 9-year-old in 1977. The 1985 Blue Jays set a franchise record for wins, but after blowing the doors off the A.L. East that year, they blew a 3-1 game lead to the Royals in the ALCS - the first year it went to a 7-game format. Stuck out in college in the Midwest, I couldn't muster much in the way of interest in a series won by a Royals team in a way that not only reminded me of the decline of my Phillies, but crumpled up the little mash note I had been writing to the Jays.
My Jays love melted from there. By the time I was through college I had seen Old Comiskey and been convinced by my roommate to adopt the contrarian ways of Chicago White Sox fans. And in the eight years from 1985 to 1993, too many changes took place for me to feel even more than a pang as I watched the Jays win successive championships. The move to the SkyDome/Rogers Center Centre and logo change put me off so much that I don't really recognize the object of my baseball infatuation. But they exist in a catnip'd fuzzy, pleasant and youthful memory, the very beginnings of a journey in my baseball mind. Hanging on.