At the Trade Deadline - Are We Forgetting The Phillies Have the Best Record in Baseball?

Share All sharing options for: At the Trade Deadline - Are We Forgetting The Phillies Have the Best Record in Baseball? 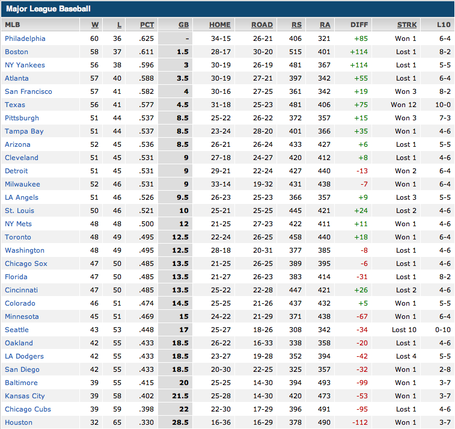 In thinking about the Phillies' "needs," are you seeking to create a perfect team, something that doesn't exist in a game in which the best team loses 60 to 70 times in a season?  Are you trying to win all games by 5 runs instead of just 2 or 3 even though a win is a win?  Are you attempting to satisfy some deep-seeded psychological need to erase those horrible memories of yourself as a little leaguer striking out in key situations, which is why you really don't like Ryan Howard despite some decent production this year?

What is it that you want from this team?  Because what we've gotten from this team -- with the current right field situation, with no big right handed bat, with the bullpen made of Iron Pigs and Ryan Madson, witih Raul Ibanez, with the bench, with injuries galore -- is the best team in baseball and one of the best Phillies teams ever.

If that doesn't satisfy you, you're missing something incredibly special this season, and I really truly feel sorry for you.