Share All sharing options for: Yes, I Think It's Hot Enough: Phillies 9, Cubs 1

Vance Worley and the Phillies ended their road trip nicely today, steamrolling over the Cubs in what was described as face melting heat. The Phils scored in six of the nine innings today, and notched 12 hits before they all spontaneously combusted, leaving nine small piles of ashes and little wisps of smoke scattered about Wrigley Field.

The Phillies scored right out of the gate, putting up two runs in the first and making Ryan Dempster work hard early on. They just kept on scoring, and the Cubs had no chance against Worley. Vance Vance Revolution (I like that much better than Vanimal, but what do I know) laughed in the face of the apocalyptic heat, throwing a sharp eight innings, a career high, and allowing just four hits -- none before the fifth inning. He walked two and struck out seven.

Several Phillies had big days. Michael Martinez continued to baffle pretty much everyone, going 2-for-5 with one RBI. After Chase's big time double in last night's game, he continued to tell all of his critics to shove it, hitting two doubles and bringing in two runs. Dom Brown went 1-for-3 with what may have been the decisive at-bat of the game. In the second inning, he worked a 12-pitch at-bat against Dempster. Brown struck out, but Dempster went (even further) downhill from there, allowing three runs to score on a double from Worley (!!!?!?), a double from Rollins, a single from Martinez, and a double from Utley.

Speaking of Jimmy Rollins (which I was, sort of), he had an outstanding day at the plate, going 3-for-5 with a double and two home runs -- one from each side of the plate. Rollins has done that once before, back in 2006. According to Franzke and LA, it's only the fourth time a Phillie has hit two home runs in the same game from opposite sides of the plate. With today's performance, Jimmy raises his average to .277. He's batting .382 in July with an OPS of 1.028. Those are some good looking stats right there.

The Phillies have an off day tomorrow, where they'll recover from spending three days in the unforgiving heat of Chicago. They're back in Philly on Friday to face the Padres, where the heat will also be unforgiving, but the crowds a whole lot nicer. 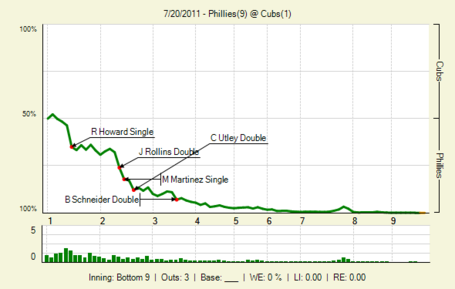