On a ballpark retro flashback night intended to honor the 1984 seasons for both the Phillies and the visiting Padres, National League champs that season, Cole Hamels flat-out dominated on a night meant to pay tribute to a season he would have experienced only as an infant.

Hamels pitched eight innings, striking out ten (including seven of the first nine batters he faced), allowing just three hits and one walk as the Phillies defeated the Padres by a score of 3-1. Hamels had one of his strongest changeups of the season, including swinging strike after swinging strike in the early going.

The Padres gave the Phillies more than a little help. In the second inning, Shane Victorino led off with a hard groundball that was misplayed by shortstop Jason Bartlett. Victorino reached second base on some heads-up baserunning, and would score on a "double" to center field that clanked off the glove of Cameron Maybin. The Phillies would score their second run on a balk by Padres starter Cory Luebke in the bottom of the fourth, and scored their third and final run later that at-bat on an RBI double by John Mayberry.

The Padres manufactured their sole run in the fifth on a single and stolen base by Cameron Maybin, and a pair of "productive out" groundouts.

Amazingly, a fifth inning single by Chase Utley was the Phillies final hit of the night, as the Padres bullpen contributed three hitless innings. Hamels and Co. were just too much for the Padres anemic offense.

Ryan Madson threw a 1-2-3 ninth inning for the save, apparently taking his new-old-new job back from Antonio Bastardo. 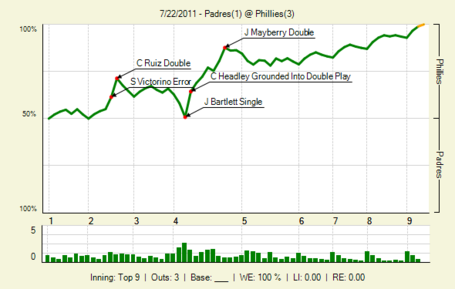