Share All sharing options for: Phillies Take Predator and Big Piece to Kashmir and Blow Up Padres 8 - 6

Paging David Cohen...paging David Cohen...nice call on Michael Martinez, a.k.a. Predator. But I'm getting ahead of myself.  Today found the Padres in Philadelphia for a nationally televised game on FOX at 4:30.  The game was actually moved to the heart of the sun in order to gain some relief from the heat.  Starting the game were Mat Latos for the Padres and Kyle Kendrick for the Phillies.

The Phillies wasted no time in jumping out to a 3 - 0 lead.  Jimmy Rollins and Shane Victorino both reached, sandwiched around an unsuccessful sacrifice attempt by Michael Martinez that reminded all present why sacrifice bunts are among my least-favorite plays in baseball.  Chase Utley, demonstrating what is perhaps my favorite play in all of baseball, hit a three run homer just over the wall in left-center.

Staked to a three run lead, Kyle Kendrick put up zero after zero.  He was helped along by a couple of double plays, good defense, and luck.  Still, the results were hard to fight with, though the more cynical among the audience probably wondered how long Kendrick could keep the plates spinning before letting them crash down on the stage.  As it turned out, the answer was "5 innings."

In the top of the sixth, the Phillies still had the 3 - 0 lead that remained from the first inning.  Leading off was Mat Latos, who piched well after giving up three in the first inning.  Latos singled, bringing Cameron Maybin to the plate. Maybin, who, while only 24, seems as though he has been around forever, has finally started to pay off on the promise he has shown since coming up with the Marlins.  Maybin hit a drive off the fair pole in left, bringing the Padres within a run of the lead.  Chase Headley drilled a solo shot one out later to tie it up.  After getting another out, Kendrick's day was done after 5 2/3 innings, 6H, 1K, and 2BB.

Michael Stutes closed out the sixth, and remained in the game in the seventh after the Phillies failed in a profoundly frustrating manner in the bottom of the sixth.  He promptly allowed Logan Forsythe to hit his first career triple to right field on a ball that, to be gracious, was fielded awkwardly by Victorino following a long carom off the wall.  Victorino was backing up Domonic Brown, who did not have a legitimate play on the ball.  Maybin drove in another run with a single.  Stutes got out of the inning with no further damage, but the Phillies were staring squarely into the face of a 1 run deficit against the best bullpen in the majors.

Spirits were low all across a broiling Nedgadelphia.  Thoughts turned to the prospect of Halladay starting tomorrow and quite possibly some "Aaaahhhhh, we'll get 'em tomorrow" sentiments were shared among friends and family in the stands.  To the plate strode Ryan Howard to pinch hit for John Mayberry, who had the start at first base oday.  He faced Chad Qualls, who had replaced Latos following his 6 IP, 5H, 2BB, and 7K.  Howard promptly drilled the first pitch he faced into the seats to tie the game.  There was joy.  And merriment. And joy.

Ross Gload was wheeled to the plate on a stretcher.  After emerging from his iron lung, he drilled the first pitch he faced for a double.  He was promptly replaced by a pinch runner.  Rollins reached, bringing up Martinez, who tried and failed and tried and failed to bunt the runners over.  He finally gave up and swung the bat.   And hit a three run shot into the right field seats.  Go back and read that again, dear friends, as I can assure you that over 40,000 in-person witnesses and millions on TV can verify that it did happen.  And there was joy.  And merriment. And joy.  Especially from the aforementioned and prescient David Cohen.

Still in the bottom of the seventh, and following an out, Chase Utley strode to the plate.  And drilled another home run.  Yes, Chase, you are the man.  At this point, heatstroke set in, Chad Qualls was removed from the game, and somehow, the inning ended, and the Phillies scoring was finished with 8 runs to the Padres 4 so far...

In the eighth, Bastardo and Herndon combined for a needlessly exciting inning, with Bastardo getting tagged for two runs.  The ninth inning was without any significant heartburn, aside from Raul Ibanez missing a very playable ball in left, turning it into a double.  Madson escaped without any further damage, and the Phillies did exactly what you would want to see on a day when Kyle Kendrick starts -- they won.

Here is your winning Fangraph: 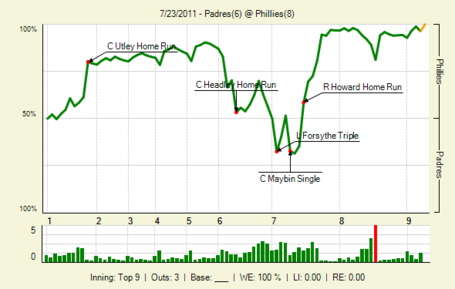