Last week, I listened to John Kruk talk on Baseball Tonight about how Roy Halladay has had a relatively disappointing season and scoffed. By just about every relevant statistical measure aside from ERA, Doc is having his best season in the majors. But what Kruk was talking about had nothing to do with statistics. Rather, I think it had to do with the perception that Halladay has had trouble at times finding that groove that allows him to float through nine scoreless innings without so much as a threat. To an extent, Kruk was right. Where he was wrong was in attributing this to anything Halladay himself has done wrong as opposed to some less than stellar defense in his starts and some bad luck on balls in play. This was on display again today.

It started right from the jump when Cameron Maybin led off the game with a single and quickly moved to second on an unconverted pickoff play. Between a pair of strikeouts, the Padres pushed in an early run on a Chase Headley single. Already, this game had the feeling of "one of those Halladay starts".

But the Phillies answered immediately against Tim Stauffer. After two quick outs in the bottom of the first, Chase Utley drew a walk and Ryan Howard singled to left. A Shane Victorino single tied it and a Raul Ibanez double put the Phillies up 2-1 just like that. The Phillies bats approached Stauffer well, taking walks, working deep counts, and driving the ball all over the place. They rallied again in the bottom of the third behind a leadoff double by Ryan Howard followed by a Raul Ibanez RBI single, a Dom Brown single, and a 2 RBI double from Carlos Ruiz.

At 5-1 after three, it seemed like Halladay could turn on his famed "cruise control". But alas, he was very nearly done in by his defense in the top of the fourth. With a man on first and one out, Ryan Howard made an absolutely brutal play on a soft grounder off the bat of Kyle Blanks. Not only did he boot it causing the ball to bounce away in front of him, but in his attempt to recover, he overthrew first base. Thankfully, Utley was there to back him up, but the play put runners on the corners. An Alberto Gonzalez single and a Tim Stauffer safety squeeze later and the score was an uncomfortable 5-3.

The Padres threatened again the next inning, and after five innings Doc's pitch count was already above 90. On another blisteringly hot* afternoon, it appeared that he would last six innings at the most. Then something funny happened. Roy found his zone and needed just seven pitches to retire the Padres in the sixth, eight pitches in the seventh, and ten pitches in the eighth to finish the day with a manageable 115 total pitches. His final line was a very Doc-like 8 IP, 8 H, 2 ER, 1 BB, and 8 K.

*Let me take this time for a short aside on the heat. I was at the game today. The best way I could describe what it felt like to sit out in section 303 on a day like today would be to say it was like taking a shower with sweat from the devil's taint. I was never happier than when, for a brief moment, the clouds completely blocked the sun and it drizzled. Then it got hot again.

For their part, the Phillies were kept off the board after the third inning. If not for a spectacular catch by Chris Denofria in center to rob Raul Ibanez of a homer, it would have been 7-3, however. Bastardo came on to close it out in the ninth and did so in 1-2-3 fashion. Is there something about closing games for the Phillies that suddenly makes anyone who has done so unable to pitch the eighth inning? A question for another day, perhaps.

The Phillies, who have won their billionth series in a row, look to make it sweep tomorrow behind Cliff Lee. Things could be worse. 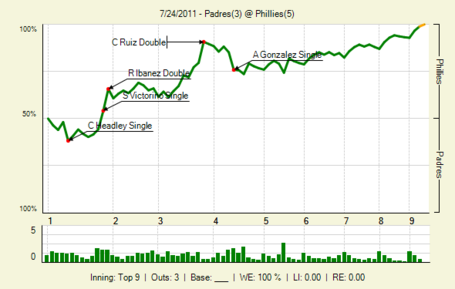