Vance Me This: Phillies 7, Giants 2

Share All sharing options for: Vance Me This: Phillies 7, Giants 2

Rookie Vance Worley continued his amazing campaign, throwing his first career complete game and defeating the visiting Giants by a score of 7-2, with a little help from four home runs by the Phillies, including an inside-the-park shot by Chase Utley in the sixth inning.

Worley allowed just three hits and two runs, striking out five and walking just one. The Giants scored their first run on a sacrifice fly in the first, and their second on a long home run from facesmash'd Aaron Rowand in the top of the eighth.  Worley's pitch count was 114, so relax everyone.

The Phillies scored six of their seven runs on the "long" ball, including three on a long Raul Ibanez homer in the bottom of the first. John Mayberry and Ryan Howard both also connected for solo shots.

But the Utley inside-the-parker was the play of the game. After the ball banged off the center-field triangle and rolled hard toward right field, anyone who knows Chase Utley knew he was going to make the run for home. A close play, and a headfirst slide later, and the Phillies were up 6-1.

Not much else to say, other than this team is really awesome to watch right now. 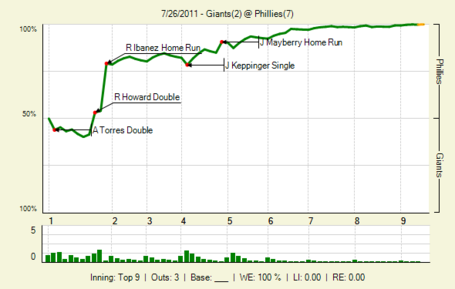