Hours after the defending World Series champion Giants snagged the biggest known prize on the trade market in outfielder Carlos Beltran, they turned aside the Phillies with a victory that perfectly followed their 2010 script: superlative pitching supported by just enough offense. Matt Cain was the star for San Francisco, limiting the Phils to four hits and one unearned run, inducing soft contact again and again over seven-plus innings, and never facing a serious threat despite registering just one strikeout.

A third-inning RBI triple by former Phillie Aaron Rowand plated the game's first run and sent Cole Hamels on the way to another hard-luck loss. Hamels wound up going 7 2/3 innings, surrendering a second run in the top of the seventh when Jeff Keppinger, the Giants' other big trade pickup (and a guy who would have been a fine addition to the Phils' roster), led off with a double and, after a walk to Cody Ross, scored on a sinking liner hit by Nate Schierholtz that Domonic Brown could neither catch nor block. Hamels followed by hitting Eli Whiteside with a pitch, but escaped the bases-loaded, no-out jam by popping up Cain and getting a double play grounder from Rowand.

The Phils scored their lone run in the bottom of the inning. Whiteside and Cain collided on a Shane Victorino pop up that fell to the ground and left Victorino at second. Following a Raul Ibanez popup, Brown cracked a grounder that took a crazy hop over the head of first baseman Aubrey Huff into right field, scoring Victorino. But Cain induced a double play from Carlos Ruiz that quelled the threat, and the Phillies didn't seriously threaten again.

Their streak of eight straight series victories now rests in the hands of Kyle Kendrick, who will start the finale against either Tim Lincecum, if he's finally stopped up, or former Phils farmhand-turned-all-star Ryan Vogelsong. Beltran is expected to be in the lineup. DUNT DUNT DUMMMMM!!!! 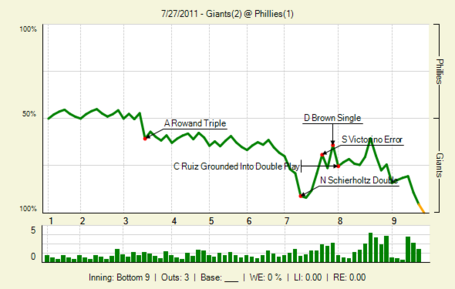