Giants 4, Dom Brownies 1: Another Series Against the Giants Lost

Share All sharing options for: Giants 4, Dom Brownies 1: Another Series Against the Giants Lost

When this pitching matchup was announced, Phillies fans didn't have much hope that they could continue their franchise-record consecutive series win streak. But hey, never bet against a hot streak, right? And every FanGraph starts at 50% win expectancy, amirite? So, off we went: Tim Lincecum and his his recently emptied gastrointestinal tract took on the Phillies and their Six of Clubs(TM) Pitcher, Kyle Kendrick.

And it started off well enough. Kendrick set the Giants down in order in the first. In the bottom half, Jimmy Rollins doubled, was bunted to third by Michael Martinez, and seemed poised to take an early 1-0 lead with Chase Utley and Ryan Howard coming up. A pop fly to short and a strikeout later, followed in the top of the second by Pablo Sandoval's  solo opposite-field home run down the left field line, set the familiar, ominous playoffish, Octoberish tone.

Don't blame Kendrick. He singled! He tagged up and hustled on a fly ball when he was on second! He laid out for a little pop fly over the mound! But this is Kyle Kendrick we're talking about, so he also gave up consecutive two out hits in the fourth that allowed the Giants to stretch their lead to 2-0, when Nate Schierholtz singled home Aubrey Huff with weak-hitting Brandon Crawford on deck. He also came out to pitch the 7th inning, which wasn't his fault, really, but gave everyone that not-so-fresh feeling. And sure enough, he walked Schierholtz to lead of the inning.

But how, o how, would he score? Well, Crawford popped up. Chris Stewart, on an odd-looking hit and run, or run and hit, singled to right, as Schierholtz advanced to third. Needing a double-play ball, but facing Aaron Rowand, pinch hitting for Lincecum, Kendrick got a hard grounder right to Michael Martinez.

And there our trouble continued. Martinez bobbled it, picked it up, and threw wildly to first. Schierholtz and Stewart scored as thousands of Phillies fans muttered, "ballgame."

And so it was. The Phillies got a run in the bottom of the inning on a two-out Chase Utley RBI double, which scored Carlos Ruiz, who had led off the inning with a double. But with runners on second and third with two out, Giants reliever and old playoff pal Jeremy Affeldt struck out Ryan Howard as thousands of Phillies fans muttered, "no really, that was the ballgame."

There was unclutcheries aplenty. And there were odd pinchitteries. Lincecum was good, but he was clearly wan, walked four guys, and was good, but not top form. And, last but not least: It is difficult for Dom Brown to lose ballgames when you take the bat out of his hands. My only theory is that Charlie is doing these emasculating late-inning liftings much like a farmer would use his newspaper to angry up the dawg.

Some person with a circus beard came in and threw many strikes, and crossed his arms and looked to the sky. Four games in San Francisco next week ought to be fun. In the meantime, the newly Jolly-Roger'd Buccos sail into town. Division leading Pennsylvania baseball fever! Feels like old times. 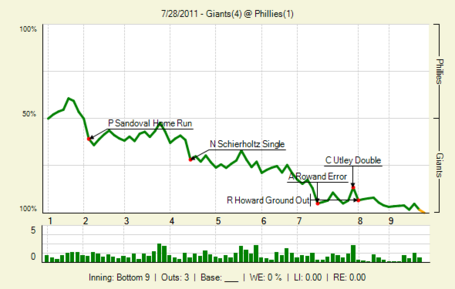