Share All sharing options for: Early to Bed: Phillies 10, Pirates 3

The Phillies struck early against the visiting Pirates, plating eight runs in the first two innings against Roy Halladay simulacrum Charlie Morton, as the Phillies rolled to a 10-3 victory behind the authentic Roy Halladay. Oh and that Hunter Pence jazz.

Chase Utley had three hits and four RBIs, and completing three-quarters of the cycle before the end of the third inning. The second baseman would finish just a double short of the cycle. Shane Victorino also came one extra base hit short of the cycle, only needing a home run.  Jimmy Rollins struck a two-run home run to right field making the score 10-0.

Halladay was masterful again, going seven innings and allowing one hit, striking out five and walking none. Charlie Manuel pulled Doc after seven innings and 98 pitches with a 10 run lead. The Pirates would score their three runs in eighth inning "garbage time" off Drew Carpenter.

Let's all prepare for the Hunter Pence Era, starting tomorrow! 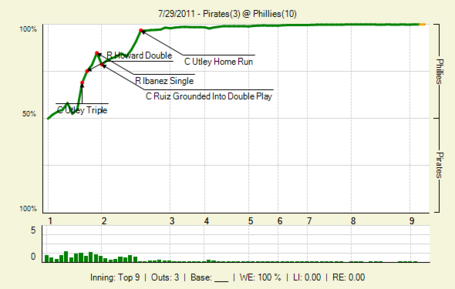