Share All sharing options for: Rage Against the Machine: Phillies 5, Blue Jays 3

Greeted by the capacity crowd at Rogers Centre with a prolonged, heartfelt standing ovation as he warmed up prior to the start of the bottom of the first inning, Roy Halladay emerged from the visitors' dugout to the best of genteel, sunny summer afternoon Canadian sportsmanship.

The good feeling didn't last long, as Halladay, already staked to an early 1-0 lead courtesy of designated hitter Ryan Howard's RBI single, struck out fearsome slugger Jose Bautista looking on a pitch on the outside corner. This prompted an argument with home plate umpire Alfonzo Marquez that would eventually build to a tempestuous climax in the ninth inning (h/t thefightins.com).

Although Halladay continued his impressive streak of road quality starts, his former team put up an impressive fight, aided by a fine start by Carlos Villanueva. Bautista returned to the plate in the fourth inning and tied the game with a jaw-dropping home run that glanced off the mezzanine level windows in centerfield. I mean, dayum.

The Phillies regained the lead in the fifth when Jimmy Rollins ground-rule doubled home first baseman Ross Gload with one out, but the Phils wound up stranding Carlos Ruiz at third. That missed opportunity loomed large in the bottom of the inning, when, after Chase Utley's errant throw kicked off Corey Patterson's foot and rolled down the right field line (Patterson got to third), John McDonald singled him home to tie the game. One out later, after McDonald advanced to second, Eric Thames singled McDonald home to give the Jays a 3-2 lead.

There it stood until the seventh, when Carlos Ruiz doubled high off the centerfield fence. Rollins advanced Ruiz once again to third base, but Placido Polanco (for the second time in the game) was unable to bring Ruiz home. That brought Utley to the plate, which in turn prompted Jays manager John Farrell to bring in lefty Luiz Perez. But the LOOGY strategy backfired when Utley homered on a 2-2 pitch to right, putting the Phils back on top, giving Utley a measure of  redemption.

Utley's homer seemed to add a bit of fuel to Halladay's tank, as he struck out the side in the bottom of the seventh and induced three grounders in the eighth, the last of which was an Adam Lind comebacker to the mound that he fielded with disturbingly quick, robotic efficiency.

Jon Rauch came in to pitch the ninth inning, tasked to keep the game close. After giving up a single to Rollins to lead off, he got two outs before issuing a walk to Ryan Howard on a close pitch that clearly bothered Rauch and moved Chase Utley, who had reached on a fielder's choice, to second base. Shane Victorino then singled to left, which brought home Utley on a close play at the plate, after which Rauch became unhinged, shouting, "That run's on you!" and other sordidities to umpire Marquez. Rauch needed to be restrained, things were thrown on the field, Farrell was later ejected for demonstrating just how far off the plate Halladay's strikes were being called that weren't being called for his pitcher, and suchlike.

And then Roy Halladay came out in the ninth, and after giving the riled Rogers Centre crowd a small thrill by giving up a leadoff single to Edwin Encarnacion, then finished the game with his eighth strikeout prior to inducing Patterson to hit into a game-ending double-play.

Jo Jo Reyes will face Cliff Lee tomorrow for the thrilling conclusion of the Phillies (winning!) 2011 interleague play. You know, for now. 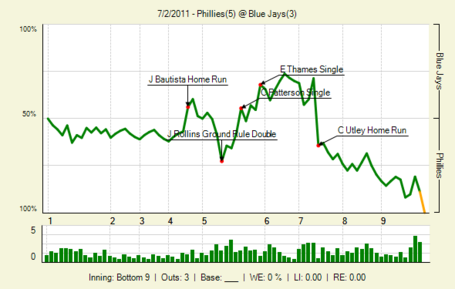