This one looked pretty comfortable: a 4-0 Phillies lead through two innings, with Cliff Lee on the mound in his first July start following a June for the ages, facing a Blue Jays pitcher, Jo-Jo Reyes, best known for the historical scarcity of his victories.  But Lee lost first his scoreless innings streak, then the comfortable lead, and finally the game as Toronto unleashed a late barrage of home runs to avoid a sweep at the hands of the visiting Phils.

The second-inning four-spot began with one out, when Shane Victorino began what would be a very adventurous day with a double and scored on Ben Francisco's single up the middle. Francisco advanced to second on a Domonic Brown single and came in on a Carlos Ruiz ground-rule double. After Wilson Valdez fouled out, Jimmy Rollins singled in both runs, and a million Philadelphians probably put this one in the win column after Lee struck out the side in the bottom of the inning.

But his scoreless streak ended an inning later, when Rajai Davis led off with a triple and came in on a John McDonald groundout. Meanwhile the Phillies stranded one runner in the third and two in the fifth. Davis basically made another run for himself in the fifth, singling with one out and stealing second and third with two before scoring on an Aaron Hill single. The Phils stranded another man in the sixth, and Toronto pulled within 4-3 in the bottom of the inning when Jose Bautista walked, advanced to third on an Adam Lind bloop to left that Ben Francisco misread off the bat, and came in on an Edwin Encarnacion flyout to shallow center that Victorino caught and got ready to fire home, where he'd have had a play, before getting his foot snared in the Rogers Centre turf and falling on his face. Lee escaped without further damage, registering his ninth strikeout to end the inning.

The Phillies squandered one last opportunity in the top of the eighth, when Victorino hit a ground rule double with one out. But he was picked off second by reliever Octavio Dotel, who promptly surrendered a double to pinch-hitter Raul Ibanez on which Shane could have crawled home. Then in the bottom of the inning, the roof fell in: Eric Thames clubbed Lee's first pich for a game-tying home run, and Bautista followed with a majestic solo shot. Lind singled, and after Juan Rivera flied out, Encarnacion ended Lee's day with a two-run bomb.

Lee's day was somewhat reminiscent of his early-season "struggles," in which he racked up big strikeout numbers but was prone to the big hit. Given the hot turf, it's reasonable to wonder if he'd have stayed in to face the heart of the Blue Jays lineup were the bullpen less depleted by injury; in any event, the abrupt reversal of fortune reminded us both that nothing in this game can be taken for granted, and that for all their strengths, the Phillies probably need better at-bats with men on and some healthy arms in the bullpen if they're to fulfill the potential of the best rotation they've ever had. 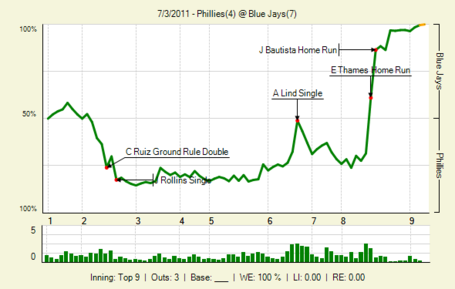