Share All sharing options for: The Dear Hunter: Phillies 7, Pirates 4

Hunter Pence's Phillies debut could not have gone any better. Sure, he only went 1 for 5 with a single, but the gritty right fielder played his first game The Right Way, and that's what's most important.

Pence's reputation as a hard-working, blue-collar player preceded him as Phillies fans greeted him with a rousing pre-game ovation. Always classy, Pence returned the favor with fistpumps and salutes galore. It appears the Phillies have finally found their missing link.

Pence's presence in middle of the Phillies lineup paid instant dividends, particularly for Ryan Howard. Pence wasted no time invalidating the thoroughly-researched view that "lineup protection" is a myth by allowing Howard to go 4 for 4 with a homer, two doubles, a single, 3 RBI, and a walk. He just missed completing the cycle on his second double, but appeared not to sprint out of the batters box--a decidedly un-Pencian lapse, but forgivable considering all else he accomplished tonight. Clearly emboldened by Pence's arrival, the Phillies offense--Pence excluded--tagged Pirates starter James McDonald for a whopping 10 hits and five earned runs in his five innings of work. Even Cliff Lee got in on the action, with two hits of his own.

The excitement generated by the energetic Pence's arrival clearly carried over to the mound for Lee. For seven innings, he dazzled the Pirates lineup, amassing 11 strikeouts against just one walk despite what seemed to be a tight strikezone. The lone hiccup came in the top of the fourth inning when Pedro Alvarez connected for a two run shot.

Alas, the only person who was unaffected by Pence's aura was Charlie Manuel, who yet again left Cliff Lee in the game just long enough to sully his final line. The Pirates managed to tag a tiring Lee for two runs in the top of the eighth before departing with two outs having thrown 120 pitches. Thankfully, Bastardo notched a strikeout to escape the inning without any further incident. Ryan Madson struck out the side 1-2-3 in the ninth to keep the Phillies undefeated in games in which Hunter Pence records a hit (for them). 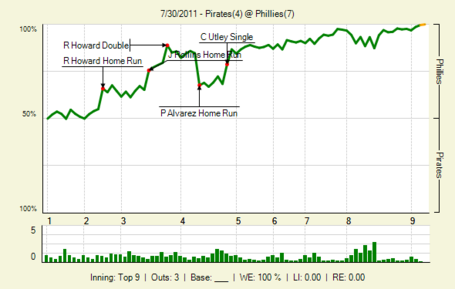