Although they seem to win just about every series these days, it has been quite a long time since the Phillies swept an opponent. In fact, not since a four game sweep of the Marlins from June 14th to 16th have they accomplished the feat. And for a while today, it seemed like their effort to close out an opponent would yet again be denied.

For most of the day it was a back and forth affair. Vance Worley took the hill for the Phillies and pitched a much better game than his final line would indicate. He had his strikeout stuff working early and was making the Pirates look downright silly, striking out five straight over one stretch from the first to third innings. He encountered some trouble in the fifth, though, when Xavier Paul blooped a two-out single to left with runners on second and third to give the Pirates their first lead of the day.

The Phillies answered right back in the bottom half, however. A Brian Schneider double, Michael Martinez single, and Worley sacrifice bunt put runners on second and third with one out for Jimmy Rollins who stroked a single to right to put the Philles back on top 3-2.

But the Pirates returned the Phillies return volley in the top of the sixth. Worley's miniscule 3.9% HR/FB ratio took a step towards regressing when, with two outs, he allowed a two-out two-run homer to the soon-to-be redundant Lyle Overbay (the Pirates completed a trade for Derrek Lee last night). Once again, the Phillies found themselves down a run.

The Pirates tacked on another run against Brad Lidge in the top of the seventh to make the score 5-3. And there it stayed until the bottom of the bottom of the eighth. Ryan Howard knocked a one out double against lefty reliever Joe Beimel, but when Hunter Pence followed with a groundball to deep short that would have made for a very difficult play at first base, Howard inexplicably took off for third and was explicably gunned down. Momentarily, it appeared that the Phillies had run themselves out of the inning. Then Raul Ibanez stepped to the plate. Already with one home run to his credit--a deep shot to center that gave the Phillies the early 1-0 lead--he took Jose Veras first pitch out to left field to tie the game at five. (And before you say "BUT IT SHOULD HAVE BEEN A THREE RUN SHOT!", keep in mind the fallacy of the predetermined outcome.)

Two nice innings of relief from Ryan Madson and Antonio Bastardo twice put the Phillies in prime position to walk things off, which they did in the bottom of the tenth. Hunter Pence slapped a double down the left field line and Raul Ibanez--already the hero once--came through again smashing a base hit to the right field wall allowing Pence to score with ease. If Ibanez manages to stay hot at the plate, it would certainly make some fans regret Domonic Brown's temporary demotion a bit less.

It did today, at least. 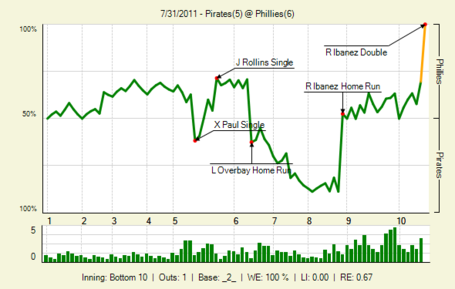