Vance Worley pitched another gem, and Michael Martinez drove in the Phillies sole run in the seventh inning, as the Phils topped the Marlins tonight by a score of 1-0. Obviously.

Worley struck out six Marlins over seven innings, issuing two walks and only allowing two hits. He threw 100 pitches -- 65 for strikes, showing good command and flashing a solid curveball.  Since his recall from Triple-A after his disastrous May 29th start against the Mets, Worley has pitched 25 innings and allowed just two earned runs, 13 hits, 18 strikeouts, and 10 walks. That'll do nicely.

Ricky Nolasco also had a solid night on the mound, allowing six hits over his seven innings. In the seventh, after Domonic Brown led off the inning with a single (one of his two hits on the night), and a walk to catcher Brian Schneider, Michael Martinez stroked a single to center field that scored Brown from second.

Michael Stutes pitched a perfect eighth, and Antonio Bastardo allowed just a walk in a scoreless ninth for the Save.

The game wasn't without controversy, as a questionable tag play on Emilio Bonifacio running up the first base line led to Bonifacio's ejection, and a non-strike call in the ninth led to the ejection of catcher John Buck. It was fun to see Trader Jack running, though. Earlier in the game, a very generous "neighborhood" call on a play at second benefiting Hanley Ramirez quieted a potential Phillies thread. Not the best night for the Men in Blue. All's well that ends well. 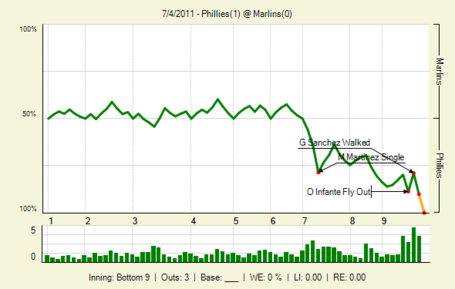