The worst event in Major League Baseball history took place on July 9, 2002, at Miller Park in Milwaukee, Wisconsin. The All-Star Game, until then a fairly casual exhibition game, ended with that most dreaded of American sporting outcomes -- a TIE!! -- resulting in a wholesale reworking of the entire All-Star Game and postseason schedules. Commissioner-for-Life Bud Selig, as is his custom, addressed the "problem" in a manner similar to treating dandruff through decapitation (thanks, Frank).

Selig and Co. decided that the best way to preclude this most horrible of outcomes was to make the All-Star Game "count" by assigning home-field advantage in the World Series to the league that won the Midsummer Classic. Among the problems caused by this -- including bullpen arm abuse -- are that the All-Star team managers are saddled with only so many discretionary choices. After the voted players, the "sole representative" obligation picks, and the player picks, managers generally only have a very small handful of actual players they can pick on their own. As a result, managers cannot field the best possible teams. Additionally, managers are pressured to get everyone into the game, which frankly is reasonable. But now that a couple pitchers have to be withheld in case the game goes into extra innings, some players never get to take the field.

So how does (alleged) sociopath and alcoholic Vicente Padilla come into this? Padilla was an All-Star selection for the Phillies in 2002. Padilla was brought in to pitch after the game entered extra innings tied at seven runs apiece. Padilla pitched two hitless innings, but was unable to continue. National League Manager Bob Brenly did Phillies manager Larry Bowa a solid by not grinding his starting pitcher's arm into dust. The problem? Padilla was the National League's last available pitcher.

With both leagues out of players, the umpiring crew consulted with Bud Selig, giving us this "thousand words" photograph: 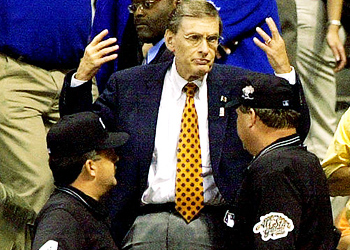 And so the game was called, the score tied at seven runs apiece, and America rioted. Now our All-Star Game "counts." Hooray!

The upshot to all of this? You may recall that the American League triumphed in the 2008 All-Star Game, giving the AL home-field advantage in the World Series. Thanks to this, the World Champion Phillies were able to celebrate their four games to one victory on their homefield. So, thanks Vicente! Drinks on me. You can take your "Fallacy of the Pre-Determined Outcome" and shove it, Plato! Baseball is a man's game!