Despite the absence of their best player to date this season, as Shane Victorino made the trip to Philadelphia to have his right thumb examined, the Phillies scored a season high 14 runs and collected 18 hits, also a season high, en route to a 14-2 drubbing of the Marlins tonight in Florida.

Cole Hamels, who started to the Phillies, did a fine job, going eight full innings and allowing both Marlins runs on a two run home run from Marlins catcher John Buck in the fourth inning. Hamels struck out five and walked just one, throwing 113 pitches.  Hamels collected his 10th victory, joining Roy Halladay in the double-digit win club. Membership has its privileges.

But the boxscore doesn't lie; the real story tonight was the offense. Every Phillies starter collected at least one hit, led by Jimmy Rollins and Ryan Howard with four apiece. The Phillies broke through in the third inning with five runs off Marlins starter Chris Volstad. The drubbing continued in the fourth, as Ryan Howard continued his absolute ownership of Volstad, ripping a two run home run (Howard's eighth career blast off Volstad), giving the Phillies a 7-0 lead.

A steep drop on this here graph. Just how I like it. 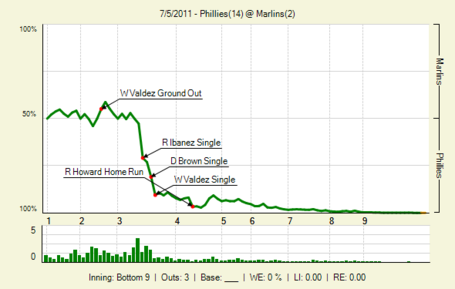