Good Lord, I don't even really know where to start.  One one hand, how down can you get on a team with the best record in baseball and only three blown saves on the season?  Sometimes you just lose, right?  On the other hand, any team that blows a four run lead and just gives a game away like that deserves a bit of ridicule.  Or a lot.

There was, of course, some good.  Chase Utley extended his hitting streak to 10 games.  (Suck it, haters.)  John Mayberry, Jr. hit not just one but two home runs in tonight's game, his first multi-homer game in the bigs. Jimmy Rollins hit a home run, continuing his hot streak. And for the second night in a row, Raul Ibanez made the Marlins pay for intentionally walking Ryan Howard before him, hitting a two run double.  (I was just as surprised as you were.)  Michael Martinez, who was playing third base for perhaps only the fourth time ever, turned a gorgeous 5-4-3 double play in the seventh to end the inning.  Michael Stutes and his Hair overcame a two base throwing error to pitch a scoreless eighth inning.  The Phillies roughed up Anibal Sanchez, who is actually good.

However, as the immortal words of the Facts of Life theme tell us, you can't just take the good.  You have to also take the bad.  And boy howdy was there ever bad tonight.  Utley was called out on a baserunning error in the first.  A ball hit by Gaby Sanchez squirted through Dom Brown's glove in the third, which let two runs score. Mayberry sort of fell down in centerfield, which is apparently something that Phillies centerfielders just do now. Kyle Kendrick went only five innings, after which the bullpen had to take over.  David Herndon allowed a two run home run, Andrew Carpenter allowed the tying run to score, and Danys Baez (who else?) gave up the walk-off home run in the tenth inning to Mike Stanton.

Of course, I must mention Dom Brown Bag Tag Gate (or something -- I'm open to suggestions).  In the sixth inning, Dom hit a triple -- which would have been his first in the majors -- only to be called out for missing the bag at second.  The Phillies TV crew Zaprudered the hell out of the footage, showing it from every angle, zooming in farther and farther until it was only a black blob perhaps on top of or maybe near to a white blob.  No matter how many times they played it, I still couldn't tell if he hit the bag or not.  (When the call was made, Dom didn't protest at all.)  Some people seem really sure that he did touch the bag.  Others express doubt.  Regardless, this was our dark night, folks.  This was the night that we shall remember forever, when Phillies fans lost their innocence, spawning years of investigations and conspiracy theories. 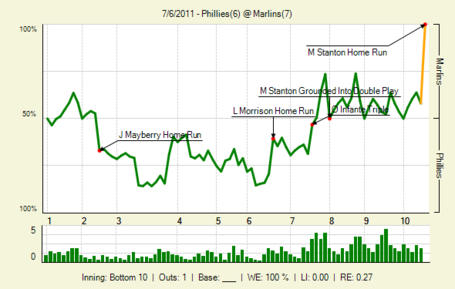