Five Sleazy Pieces: My Personal Primer to Hating the Braves

Share All sharing options for: Five Sleazy Pieces: My Personal Primer to Hating the Braves

Anytime the Phillies play the Braves, I'm forced to remember the many and varied reasons I really hate them.  While some people's hatred is simple ("I hate them because THEY SUCK!"), my hatred goes much deeper than that.  When I hate something, I hate everything about it, and in great detail.  I want to share my hatred with others.  Luckily, this is just the place to do it.

When I talk to people about why they hate the tomahawk chop, many say they hate it because it's racist.  I agree with that.  But I also hate it because it's really, really annoying.  Seriously, is cheering not enough when something good happens?  Can't you just cheer like everyone else?  Why do you have to do a stupid sing-song cheer with that ridiculous hand movement?  I've said it before and I'll say it again: someday, I'll meet a Braves fan, and I'll kick him in the nads and do the tomahawk chop over his writhing body. 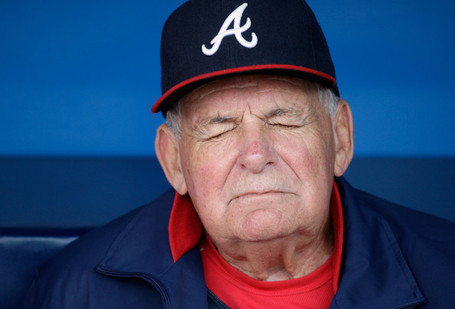 Alive?  Dead?  Sleeping?  You be the judge! (Picture via Getty Images)

I know he's not actually the manager of the team anymore, but he's an institution down there, and I still can't stand him.  When he wasn't arguing some pointless call he didn't like and getting ejected (or beating up on his beloved wife), I was mostly convinced he was dead in the dugout.  Did anyone ever see him move?  I'd say it would have been fun to see Cox and McKeon manage opposite each other in a battle of the old guys, but spry, energetic McKeon is the obvious winner -- and he's 10 years older than Bobby Cox. 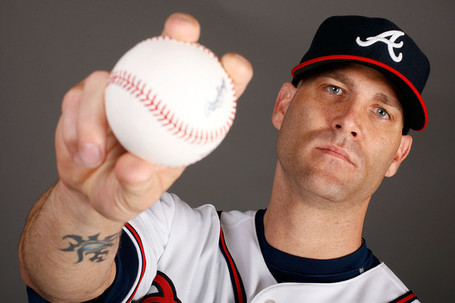 This picture is in contention for douchiest picture of all time, if there were such a contest.

What is this guy's problem?  Why does he feel the need to hit Phillies batters?  Is it just because he's old and has a surgically repaired elbow?  He hit Placido Polanco on the elbow in April last year and maimed him for the rest of the season!  In the last game of the 2010 season, he hit Carlos Ruiz on the knee.  He hit Ben Francisco this season.  His Tommy John assisted career renaissance must be nearly over by now, right?  Because seriously, go away. 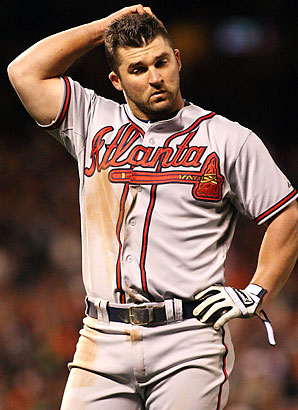 Why does he wear his uniform so tight?  It looks like he's wearing a child size uniform.  He probably has to oil himself up to even put it on, let alone actually play baseball in it.  There are times I think the sleeves should be cutting off the circulation to the rest of his arms.  And his pants...oh God.  Of all of the baseball players to wear tight pants, why does it have to be him?  Why?  This guy was annoying enough when he was on the Marlins.  He could be good and it wouldn't matter since it was the Marlins.  Now?  His skills could actually have an impact.  Or they would if he hadn't completely forgotten how to swing a baseball bat.  Despite his sucktastic playing (which is probably temporary), he always seems to make insane defensive plays against the Phillies.  Against other teams?  He barely knows where to stand.  But against the Phillies, the guy is a genius.  A stupid looking genius. 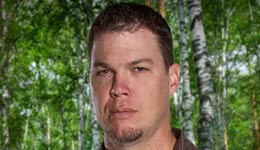 This appears to be Chipper's most recent school picture.  I think he should have chosen the laser background instead. (Picture via www.outdoorchannel.com)

I could go on and on for days.  He is my most hated baseball player of all time, eclipsing everyone who has come before and anyone who will follow him.  He is a 39-year-old baseball player who calls himself Chipper.  That alone is more than enough reason to hate him.  He has a fauxhawk, which just screams "I'm a rapidly aging baseball player on a team of more talented younger guys who I can't relate to!!"  He can't keep his mouth shut to the press, whether he's insulting all umpires (and then taking it back), or calling out one of his teammates for not playing while he's hurt.  Good old Chipper always plays when he's hurt, and he thinks he's a hero for it.  That's why at age 39 his body is breaking down like that of a 70 year old.  So why not encourage a talented young baseball player to do the same, instead of taking care of himself?  He had an 18 month extra-marital affair with a Hooters waitress that resulted in a love child.  He named one of his children Shea, because of all the success he had at Shea Stadium.  That's just...good God, what a douche.