Share All sharing options for: Signs and Wonders: Phillies 3, Braves 2 (10)

After a rain delay of nearly two hours, the Phillies and Braves turned in a game fully worth the wait: low scoring, great pitching, and improbable late heroics for the home team. The upshot was a dramatic extra-innings win that assured the Phils would hit the all-star break two days hence with their NL East lead intact.

Roy Halladay waited out the rain with no immediate ill effects, mowing the Braves down 1-2-3 in the first. But he looked positively un-Doc-like to start the second, surrendering back to back hits to Larry Jones Jr. and Freddie Freeman around a Carlos Ruiz passed ball that gave Atlanta a 1-0 lead. But after firing a wild pitch that moved Freeman to second, Halladay avoided further damage. The Phillies quickly tied it in the bottom of the second against Brandon Beachy as Raul Ibanez and Ruiz singled and, after a Domonic Brown strikeout, Wilson Valdez brought in Ibanez with a sacrifice fly. The teams traded runs again in the fourth, as the Braves cashed in one from a second-and-third, no out threat before Halladay escaped and Ruiz lined a solo homer to left.

There it stayed, as Halladay locked in and the Phillies threatened a couple more times against Beachy, to no avail. The Braves unleashed their Deadly Bullpen of Death--seriously, these guys are good, but I'm sick of hearing about them--in the seventh, as Eric O'Flaherty tossed a scoreless frame and fellow lefty Jonny Venters worked around a hit and a walk in the eighth. The Phillies turned to their last remaining reliable relievers, and Michael Stutes and Antonio Bastardo each tossed clean innings. But when the Phils couldn't score in the ninth against the sounds-like-a-'70s-lounge-act veteran combo of Scott Linebrink and George Sherrill, it looked like the Braves had the edge going into extras.

Then... HE appeared. I refer of course to lefty assassin Juan Perez, who did something no Phillie pitcher had accomplished in twenty years: strike out the side on nine pitches. Lefties Jason Heyward and Nate McLouth took some of the ass-ugliest no-contact swings you'll ever see, and righty pinch-hitter WIlkin Ramirez looked less sad but reached the same result. (The last Phillie to do this? Andy Ashby, against the Reds on June 15, 1991, in his second big-league start. The Phillies lost the game. Perez already has assured himself a greater Phillies career, though admittedly that's a low freakin' bar.)

Ibanez got Perez his first major-league win in the bottom of the inning, when he slammed a no-doubter home run--his first walkoff shot since April 2009--to right off Atlanta reliever Scott Proctor, whom the Phillies surely were happier to see than closer Craig Kimbrel. Gotta love "The Book."

This one lived up to its billing. Tomorrow features another fine mound matchup as Cliff Lee goes for the Phillies against the Braves' Tommy Hanson. 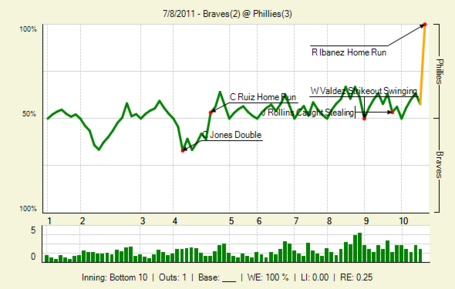