Another game between the Braves and the Phillies and another nail-biting, well-pitched game going to a Bullpen Death March in extra innings.  Tonight's version involved Cliff Lee and Tommy Hanson.  Oh, and Cliff Lee hit a ball nearly 400 feet for a home run today.  And the standings are, after two more games in the Series of the Century (this week), exactly the way they started before the series got underway, and the season is two games shorter.  And the Braves are still three back in the loss column, needing to lose 4 fewer games than the Phillies over the next 72 to pull ahead.  And Larry Jones is on the DL, where he belongs.  Hopefully, J-Hey calls him out on it.  Torn meniscus? Get a cortisone shot.  Sheesh.  But this is about the game.  Clickit the link.

On a much better day for baseball than last night, the Phillies played in front of close to 46,000 fans for their 171st consecutive sellout and a crowd that was 104% of the capacity of OFJOAB.  And the game lived up to the expectations of all, but for the sad, weepy ending.

Cliff Lee was fabulous today.  The Phillies hitters owe him for this loss.  Lee's Game Score was 79 in a losing effort.  He went 8 innings, struck out 9, walked 2 and gave up 3 hits.  He was masterful.  But for the home run hit by Dan Uggla in the fifth, Lee was untouchable.  Prior to the homer, Lee had retired 11 straight Braves, allowing just a single in the first.  After the homer, he scattered a couple of walks and a bunt single, never allowing the Braves to mount another threat.

Unfortunately, Tommy Hanson, who I like the most of the all the starters on the second-best staff in baseball, matched Lee for seven innings.  Hanson struck out 6, gave up 4 hits, and walked just one.  And he's cost-controlled and young.  It's hard not to like what he brings to the Braves, except, you know, he plays for the Braves and stuff.  I man-crush opposing pitchers from time to time (TIMMEH!, mostly), but there may be a little Montague/Capulet going on here with Hanson.  He's just good.  And he seems so down-to-earth and likeable.

Hanson's only blemish was an unlikely homer to right center given up to Lee.  Lee has been a good hitter this year (for a pitcher or for a Phillies corner outfielder), and it seemed like a homer from one of the pitchers was likely at some point.  But...did anyone really think Lee would homer off Hanson?  Really?  Adding to the glory of the moment was that Lee didn't just close his eyes and Blanton it.  He had an epic, ten pitch at bat before launching it 400 feet.  He also celebrated somewhat less than Hanley Ramirez did recently for a single that tied a game between the Fish and the Phillies, with a little fist pump going to first.  But it was tasteful and CLASSY fist pumping.

After Lee and Hanson were both pulled for pinch-hitters, the Bullpen Death March started.  [Digression: For what it is worth, I can only wonder why Lee was lifted for pinch hitter Ben Francisco.  Even if the pitch count was over a hundred, let Lee hit and bring in the reliever to start the next inning.  I mean, really.  The hitting is getting bad enough that I actually thought this stupid thought.]

Bastardo and Perez each had effective innings.  Perez had another two K's today to go with his historic 9 pitch, 3 K performance from yesterday.  Seriously, who is this guy?  Where did he come from?  The Braves matched with slightly less impressive, but just as effective outings from Venters, O'Flaherty, and George Sherrill.  And the Phillies came close to getting a run in the 10th, with a two-out rally putting three men on base before John Mayberry, Jr., grounded out to first to end the threat.

And then came Stutes.  Stutes of the luck waiting to come back to earth.  And of the walk rate that's just too high.  And he walked the leadoff hitter, our friend Eric Hinske.  And all sorts of hilarity ensued.  A pinch runner.  A sacrifice to second.  A single by Sea Bass, scoring the pinch runner.  And a home run from Brian McCann.  And the dream was over until Dreamy McDreamboat launches tomorrow.  He will heal the sick, make the lame walk (except Chipper), etc.

Here is a Fangraph of Sadness.  It is sad. 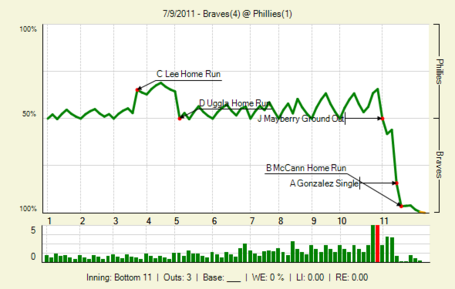