Share All sharing options for: He Can Do It All: Phillies 2, Dodgers 1

He pitched eight shutout innings, allowing four hits, two walks, and striking out ten. He got out of a jam in the first inning with runners on first and third with one out. He made some great catches while covering first base. And he hit his second home run of the season. Cliff Lee can do it all and make it look easy. Of his 124 pitches, 87 were strikes. Yes, you read that right -- Lee threw 124 pitches. That is quite a few, but Lee's next start will be with an extra day of rest. I should also note that tonight's Cliff Lee home run, hit in the seventh inning, makes him the first Phillies pitcher to hit more than one homer in a season since Randy Wolf in 2004.

Other people also played, I'm being told. Jimmy Rollins went 2-for-3 with a walk and led off the game with a single. He brought in the first run of the game with a double in the third inning. Wilson Valdez scored that run -- he hit a single and was sacrificed to second by Lee. Incidentally, Lee didn't seem all that happy to be bunting. Hunter Pence and Shane Victorino hit singles, and Utley would steal a base in the first inning after hitting into a fielder's choice. Shane also got plunked again tonight, though all he did was stare intensely at Lilly while walking up to first base.

Ted Lilly pitched well (six hits and two runs over eight innings), but the Dodgers couldn't get anything going against Lee. Jamey Carroll and Casey Blake each had two hits, and Dee Gordon and Andre Ethier each had one. Ethier didn't get his first hit until the bottom of the ninth, off of Ryan Madson, and Casey Blake's ninth inning hit would bring in their only run of the game. For the second time this road trip, the Phillies would come within one out of a shut out, only to have it cruelly snatched away at the very last moment. Madson gave up a run on two hits, but held on for his 21st save (despite Rod Barajas being the last batter of the game, sending me into frightened flashback-induced convulsions).

The broadcast tonight also focused on Chris Wheeler's 66th birthday. A standing cardboard cutout of Wheels visited Phillies people David Montgomery, Pat Gillick, and Scott Franzke (for some reason standing in the middle of a basketball court). Then, cardboard Wheels went to the zoo and fed the giraffes, and played with some puppets (one of them looked like Placido Flamingo of the Muppets). Cardboard Wheels took a "road trip" to end his birthday, but that just seemed to consist of the cutout standing near a car. What did I learn about Wheels? After all those shots of him yakking in the booth, I noticed for the first time that he has an enormous head. Seriously, take a look at it sometime. It's rather large.

With this win, the Phillies 76-40. They are 36 games over .500 for the first time since 1977. They've won eight straight road series. The last one they lost? The series against the Mariners in the middle of June. I'm just going to read this paragraph over and over again as I fall asleep tonight.

Tomorrow, Vance Worley takes on Chad Billingsley at 3:10 for the last game of their last West Coast road trip of the year. I'm just excited the game isn't at 10pm. 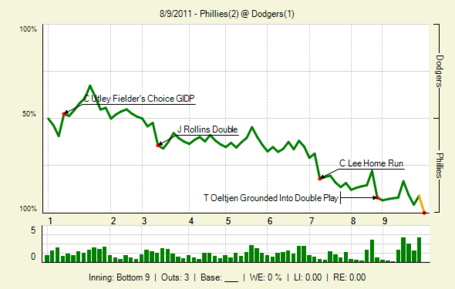