The unstoppable Phillies keep on rolling.

Down 6-0 to the Dodgers after three innings, including a brutal five run top of the first for Vance Worley, the Phillies stormed back, scoring a combined nine runs in the fourth, fifth, and six innings, and holding off a late Dodgers charge in the ninth to complete the sweep of the Dodgers. The Phillies' 9-1 west coast road trip is the best 10 game trip in franchise history.

Worley had a rough go in the first, the capper being a big three run home run from Juan Rivera. The rookie right-hander would settle down somewhat, only allowing one more run through the fourth inning and striking out six. Worley did a nice job of eating a few extra innings when all looked lost, salvaging the bullpen to some extent.

Most fans seemed content with an 8-2 road trip, but the Phillies had other ideas. The comeback started with a Hunter Pence two-run bomb to center field in the fourth. They would plate their third run to make the score 6-3 on an RBI single from Mr. Worley himself.

The Phillies would score two more runs in the fifth after a Dodger error and an RBI groundout for Raul Ibanez.

The comeback was completed in the sixth. After the Dodgers stretched their lead to 7-5, the Phillies threatened with runners on second and third with one out. Shane Victorino struck out, putting the burden on Chase Utley, who responded with a two RBI single that tied the game at seven runs apiece.

And then, the killing blow, a two-run opposite field bomb for Ryan Howard that put the Phillies up 9-7.

The Dodgers would threaten in the ninth off Ryan Madson, scoring one run and bringing Rod Barajas up as the winning run. Anyone who's watched the Phillies the last couple of seasons knows that Rod Barajas is the Death of All Joy. But not this time, as Madson got Barajas to fly out to center field, ending the game. 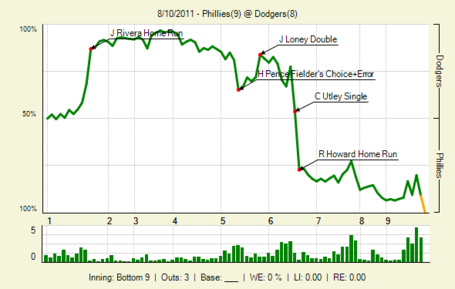