Livan and On and On: Nationals 4, Phillies 2

Share All sharing options for: Livan and On and On: Nationals 4, Phillies 2

How best to describe getting beaten by Livan Hernandez? Is it like rejection at the hands of a girl you went in thinking you're too good for? Drowning in a vat of room-temperature pudding? Trying to do a yo-yo trick and knocking yourself unconscious?

Whatever your preferred analogy, the Phillies lived it Friday night, enduring one inning after another without managing to hit the zaftig veteran's Moyeresque assortment of misnamed fastballs and breaking stuff. He particularly bedeviled Hunter Pence, twice striking out the Phils' new rightfielder before inducing a double play from him for the last two outs Hernadez recorded. Livan added injury to insult by driving in more runs (two) than he allowed in his 6 2/3 innings, on two singles.

The first was off Cole Hamels, who followed up his complete-game gem against the Giants last Saturday with something rather more forgettable: five innings, six hits, three runs, a season-high four walks, all on 88 pitches. His fastball velocity was notably down, with Todd Zolecki tweeting that Hamels' fastball on the night averaged almost three miles slower than his season average. (He later reported that Hamels is going through a dead-arm period.) The best that can be said for Hamels, and it's not nothing, is that he kept the team in the game anyway: facing a bases-loaded, no-out jam in the fifth inning with the team already trailing 2-1, he got Jonny Gomes to fly out to shallow right, allowed one run on a Jayson Werth groundout that wasn't hit hard enough to start a double play, and struck out Wilson Ramos.

Yet that third run proved to be enough. Hernandez was ably relieved by Tyler Clippard through the eighth. Nationals closer Drew Storen came on for the last inning, and promptly found himself in trouble when Shane Victorino and Chase Utley started the inning with singles. Storen recovered to strike out Ryan Howard, got a flyout from Pence that scored Victorino, and popped up Raul Ibanez to end things.

The obvious lesson here is that the Phillies should play every single friggin' day. Record in pre-off day stretch of 20 games in 20 days: 16-4. Record since off day? 0-1. Is it too late to sell? 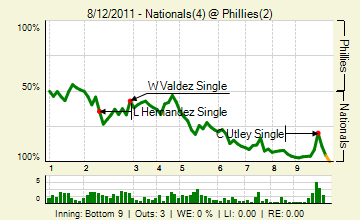