Under ordinary circumstances, a late-season battle between division leaders would create an electric, "playoff" atmosphere.  Having lulled local fans to sleep by carrying a 15 game lead in the loss column over the first non-Braves team for the wild card slot with 43 games to go, the thoughts of most fans likely turned to the pomp and circumstance involving the unveiling of the Harry Kalas statue.  Or to Cole Hamels' shoulder.  Still, a baseball game was played, with Roy Halladay facing Josh Collmenter and his odd, over-the-top, over-the-top delivery.  Clickit the link to see how it all went down.  In flames.  At the very end. Bummer.

The Diamondbacks struck first in the second inning. Chris Young reached on a single and stole second base. He was knocked in by Lyle Overbay, recently taken in by the Diamondbacks as a refugee from the Pirates under a provision of the UN Convention Against Torture.

In the third inning, Roy Halladay got things going with a single off Collmenter.  After dispatching Rollins and Victorino, Utley doubled, moving the fleet Halladay to third.  Ryan Howard walked in a classic "unintentional intentional walk." The bases were loaded for Howard's beard, Hunter Pence.  In what can only be described as a battle of knees and elbows, Pence and Collmenter engaged in an epic, if awkward, confrontation with the sacks juiced. Pence came back from an 0-2 hole and worked the count full after 10 pitches.  With the crowd on its feet for the 11th pitch, Collmenter got Pence to chase low and away for the strikeout.  At least nobody lost an eye.

In the bottom of the fifth, the Phillies came back.  A single by Rollins was followed by a shot that was lined into the right field seats by Shane Victorino, giving the Phillies a 2 -1 lead.  Utley followed with his third hit, but the rally died when Howard and his beard struck out, bringing their total to 5 Ks through 6 plate appearances to that point.  And I swear to god that I wrote that part of the wrap *before it happened* since I just knew it was coming.  Welcome back to earth, Hunter.

In the top of the 6th, Carlos Ruiz was nearly neutered by a foul tip.  After walking it off, he managed to continue play with the count at, per the announcers, "no balls and two strikes." H/t The Dark for pointing this out.  It was as cringe-worthy as most standard fare on Youtube.

The bottom of the seventh started with Roy Halladay leading off an inning for the third time of the night.  Halladay hit a double for his first XBH, ever.  He looked a bit confused about the whole thing as he pulled into second base.  Rollins drilled a ground ball at Collmenter's legs to allow Halladay to move to third, bringing Victorino to the plate with one out and a runner on third.  Victorino popped out to first, bringing Utley to the plate and ending Collmenter's effective night at 6.2 innings, allowing 8 hits, 2 runs, 1 walk and striking out 8.  Utley whiffed to end it, but the inning did provide us with the enduring image of Halladay running the bases with the grace of a giraffe.  It was *so* worth it.  But remember this moment, nonetheless.

Halladay took out his frustration at failing to score in the seventh by striking out the side in the eighth.  A man among boys, Halladay took down Kelly Johnson, Willie Bloomquist, and the neck-tattooed Ryan Roberts.  Maybe it's a generational thing, but does anyone expect to be taken seriously with a neck tattoo?  Really?

In the bottom of the eighth, the Phillies went quietly, and Halladay came out to finish things with 100 pitches under his belt on the evening.  Madson and Bastardo were warming in the pen in case anything went awry.  And awry they went.  Justin Upton started things off with a single after a tough at-bat.  Miguel Montero followed with a single, putting runners at first and second.  Chris Young struck out on a foul bunt attempt, giving the Phillies an all-important first out. The aforementioned refugee Lyle Overbay came to the plate, and promptly drilled a double to right center, plating two runs and putting the Phillies in the hole, 3 - 2.  It was Overbay's third hit of the night and it drove in his second and third RBI of the evening.

It got really quiet at this point.  Following a pop-up by feel good story of the year (for real) Sean Burroughs, an intentional walk was issued to Gerardo Parra.  Paul Goldschmidt came in to pinch hit for Shaw, who finished the 8th for Arizona.  Halladay, though he was laboring and approaching 120 pitches, struck him out to end the night with 9 IP, 14K, 1BB, 8H, and 3 ER on 123 pitches.

The Phillies came up in the ninth facing J.J. Putz.  Carlos Ruiz led things off, working a walk.  Michael Martinez, amazingly, executed a sacrifice bunt successfully to put Ruiz at second.  Ruiz was replaced at second by John Mayberry, and Ross Gload came on to pinch hit for Halladay.  Gload went down on three pitches, leaving some to perhaps pine for the days of Matt Stairs.  Up came Jimmy Rollins with the game on the line.  After whiffing, the final bit of air left the stadium and a disappointing loss was in the books.

Here is the Fangraph of sadness: 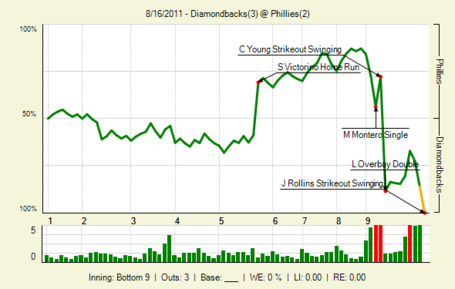