The Phillies are now playing at a level of excellence almost sufficient to stay ahead of their most neurotic fans' worst anxieties. One night after a loss to the suddenly-plausible playoff opponent DIamondbacks that featured a grab-bag of possible downfall scenarios--inexplicably cold bats, a bad break or two and an ill-timed flash of mortality from ace of aces Roy Halladay--they regrouped behind another strong Cliff Lee start and a late offensive explosion to pummel Arizona and even this series at a game apiece.

This didn't seem certain early on. After Jimmy Rollins gave the Phils a 1-0 lead with a leadoff homer, the D'backs went ahead 2-1 in the second as Lee walked Chris Young and surrendered a two-run shot to rookie slugger Paul Goldschmidt. But after surrendering an infield single to pitcher Joe Saunders to start the third inning, Lee set down the next ten Arizona hitters he faced. He allowed two more base runners in the sixth and seventh, then promptly erased each with inning-ending double plays.

Meanwhile, the Phils tied it up at 2 off Saunders in the second on a Hunter Pence double and an RBI single from John Mayberry Jr. But the lefty then matched Lee zero for zero through the middle innings, until the Phillies finally took control in the home seventh. Pence led it off with a walk and went to third on a Mayberry single. Wilson Valdez scored them both with a deep fly to straightaway center that kept carrying for a double that chased Saunders, and came in two batters later on Ben Francisco's sac fly. The Phils scored four more in the eighth, and Antonio Bastardo and Ryan Madson finished things up without incident as the team improved to 79-42 for the season. If you're keeping track, that leaves the 2011 club one game behind their 1976 forebears in the race for the franchise's single season win record. 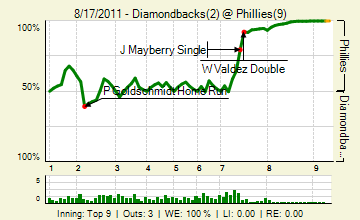