Who Would Buy That? Pretentious Dress Shirt Edition

Share All sharing options for: Who Would Buy That? Pretentious Dress Shirt Edition

I have an obsession with baseball in pop culture. Seeing how baseball is portrayed in movies, music, and television is a great hobby of mine. (Who else is going to watch the movie "The Pitcher and the Pin-up"?) I am also fascinated by baseball merchandising. How many of the things I use in my everyday life could have the Phillies logo on it? Is it possible to have an entire outfit of Phillies clothing, including shoes, socks, and undergarments? I’ve spent time exploring the Phillies online shop (as well as other websites specializing in sports merchandise), and I’m routinely baffled by what I find there. I look at things that are useless, pointless, confusing, frightening, and irredeemably ugly, and I wonder: Who in God’s name buys this?

That is the question I’ll be asking every week, as I explore the world of Phillies merchandise and feature one thing that is so utterly unexplainable that I need to know: Who would buy that?

For my first ever entry, I’ve decided to feature the thing that inspired me to do this series: this multicolored button down dress shirt by designer Robert Graham. 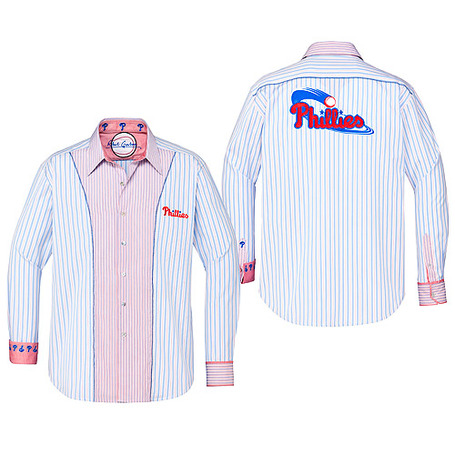 Take in the whole image. Two different kinds of stripes. Four different colors. Embroidery. Logos. Cuffs. Buttons. A collar. It starts out as a button down shirt, that’s for sure. But beyond the basic "shirt" elements, it doesn’t resemble anything remotely shirt-like at all. I’m not going to pretend I’m any kind of fashion expert, but I know what ugly looks like, and this screams ugly to me. Loudly.

Let’s start with the body of the "shirt." There are two different kinds of stripes: a wide light blue, red, and white stripe, and a thin red and white stripe. Taken separately, neither one is particularly offensive. But mash them together on the same shirt, and it looks like you’re a candy cane in disguise. Most of the shirt is in the light blue stripe, but then down the center of the chest and up around the collar there’s the red and white stripe pattern. That area of the chest is outlined in dark blue or black piping, making it look like a bib. That’s an attractive look on any man.

There was a chance for redemption with the sleeves. They’re in the blue stripe as well, but then you get to the cuffs. I get that the designer wanted to continue the motif, but putting the red stripe on the cuffs makes it look like the wearer has on very large bracelets. Again, a fantastic look on any man.

As if the shirt didn’t have enough going on, there are logos in case you get bored. The Phillies logo is either embroidered or screen printed over the heart of the wearer, which is perfectly fine alone. But then you get a look at the back, and there’s a huge Phillies logo, complete with a baseball in motion and its blue swoosh tail. This says to all who gaze upon this shirt: "I love the Phillies so much that I can’t even wear a simple dress shirt without their name emblazoned upon it! PHILLIES PHILLIES PHILLIES! I’M SO LONELY! SOMEONE LOVE ME, PLEASE!" 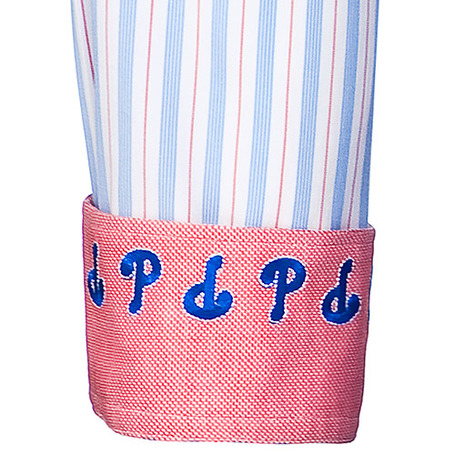 A line of Phillies Ps are embroidered on the inside of each cuff, which can be seen if you roll it up. However, if you roll up the cuff more than once, it’s completely lost. And I don’t know a lot of men who just roll up their cuffs once, because really, what’s the point of doing that? If you're warm, how is rolling up your sleeves two inches going to help? A line of Ps are also embroidered in blue behind the collar, in a place that no one is going to see unless you wear the shirt inside out. (Though that would actually improve this garment.)

Now, the most important question: Who would buy that? Well, for starters, someone with a lot of money to burn on ugly, stupid stuff. The shirt was originally priced at $198. Think about that. Think about what you could buy with that. Several good meals. A night in a nice hotel. Actual Phillies tickets. You could take me on a really fancy date. (Note: I would not date a person who buys this shirt.) The person who buys that shirt doesn't date very much, because he's convinced himself that his success (and not his bad taste in clothes) scares women off. He already has a lot of Phillies jerseys and t-shirts, but he’s looking for something more "upscale." However, he has no clue that he is missing "upscale" and instead landing on "I have no taste." He drinks that Michael Imperioli tequila because he remembers him from the Sopranos, and the Sopranos were badass.  His car is expensive, loud, and has large tires, because he is most assuredly compensating for something.

It’s been reduced to $99, so the dream of owning this "shirt" is nearly attainable for the average Joe looking to advertise that you are trying way to hard. If you are thinking about purchasing this item, please seek professional help.