The Phillies tremendous run continued tonight in Denver, as pinch-hitter John Mayberry Jr. struck a game-tying, two out, two strike, two run home run in the top of the ninth off Rockies closer Huston Street, followed by a go-ahead solo shot from Shane Victorino in the top of the tenth to give the Phillies a thrilling 4-3 victory.

The Rockies struck first with a Seth Smith two run home run in the bottom of the second off Cole Hamels, who did not pitch quite to his normal standards, struggling with his command but winding up with a tidy linescore -- six innings, five strikeouts, one walk and six hits. The home run to Smith would give the Rockies their only two runs off Hamels. Hamels found himself in some trouble in the fifth, loading the bases with just one out, but would strike out Mark Ellis and Troy Tulowitzki in a couple epic at-bats.

The Phillies scored their first run in the top of the seventh, with red-hot (yes, still!) Raul Ibanez driving in Hunter Pence from first base on a double to deep center.

The Rockies would strike again in the bottom of the seventh, with Chris Iannetta striking a solo home run off Mike Stutes, giving the Rockies a 3-1 lead.

The Phillies headed to the top of the ninth to face Rockies' closer Huston Street. After retiring the first two batters, Placido Polanco and Raul Ibanez, Carlos Ruiz kept the inning alive with a double to left. John Mayberry then contributed one of the more memorable at-bats in recent regular season history, working eight pitches from Street, finally crushing the last pitch deep into the left field seats. Jimmy Rollins followed up and almost gave the Phillies the lead with a deep shot to center that was tracked down and caught by Dexter Fowler.

The Rockies threatened in the bottom of the ninth, with Antonio Bastardo allowing a leadoff single to Smith. After Iannetta bunted Smith to second, Bastardo induced ground ball outs for the final two outs of regulation.

The Phillies wasted no time in the top of the tenth, with Shane Victorino crushing the seventh pitch from Rex Brothers deep into the left field seats. Victorino was batting right handed off the lefty Brothers. Hmm.

Ryan Madson pitched a perfect bottom of the tenth for the Save.

Time for sleep. With the Braves loss, the Phillies now sit seven games up in the division. 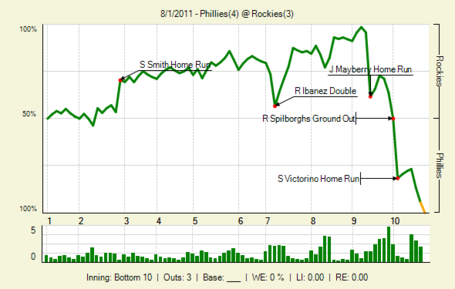