My Roy-Friend's Back: Phillies 5, Nationals 0

Share All sharing options for: My Roy-Friend's Back: Phillies 5, Nationals 0

Everyone can rest easy: the Phillies will not have a losing record in 2011.

The team claimed its 81st victory of the season against a frequent foil, Nationals starter John Lannan, who fell to 1-12 against the Phils for his career. The bigger deal by far, though, was the winning pitcher: Roy Oswalt, the Forgotten Ace. In his third start since returning from the disabled list, Li'l Roy broke out the 2010-vintage Good Stuff: eight innings, eight hits (seven singles), one walk, and a season-high nine strikeouts, all on an efficient 115 pitches. Li'l Roy might have been at his nastiest in the eighth inning, popping the gun at 93 as he registered his final two strikeouts.

The Phils got all the offense they needed in the fourth inning, scoring two unearned runs. John Mayberry, Jr., starting again in place of Raul Ibanez, singled with two outs but seemed to be caught off first base. Shortstop Ian Desmond couldn't handle the throw to second, however, and the inning continued. Carlos Ruiz drew a walk, and Wilson Valdez continued his shockingly strong hitting when up with runners in scoring position by depositing a two-run triple into right field.

Hunter Pence stretched the lead to 3-0 with a solo homer off Lannan to lead off the sixth, his third since joining the Phillies. Jimmy Rollins knocked in the team's final two runs with a single off reliever Colin Balestar. Oswalt did the rest, backed up by a 1-2-3 frame from Michael Stutes in the ninth. 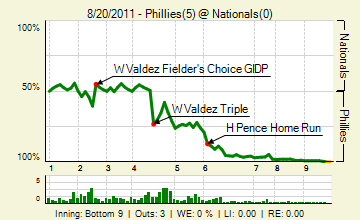