Baseball Is Not Football: Phillies 4, Nationals 5

Share All sharing options for: Baseball Is Not Football: Phillies 4, Nationals 5

See, on Friday, I tempted the baseball gods by explaining how the Phillies are playing like a football team, a top-tier one no less..  But, as with Friday night's game, today we once again saw how the baseball gods can remind us oh so clearly how baseball is decidedly not football.

Unlike in football where if you have a lead going into the last few seconds you pretty much know the outcome, in baseball, there is no clock.  And today, we saw what that means.  Trailing 4-3, the Nationals were down to their final strike.  Antonio Bastardo had looked absolutely vicious with his stuff for the first 2 batters and the first 2 strikes on Ian Desmond.  But then . . . baseball happened.

Desmond hit a pretty good pitch and placed it into the left field seats.  The Phillies were stunned, and the game was tied 4-4.  Then more baseball in the bottom of the 10th.  With the bases loaded, Brad Lidge threw a pitch inside to Jonny Gomes, who gladly let the ball deflect off his body armor without even trying to get out of the way.  But, that's allowed in baseball, and that scored the winning run for the Nationals, who took the series from the Phils, two games to one.  It was the Phillies first road series loss in 9 series, which is pretty amazing.

It still doesn't take the sting off of this one, nor off of the Phils' third blown lead in the ninth inning in the last five games.  Regardless, the Phils are still 6.5 games up on the Braves.  I'll take that. 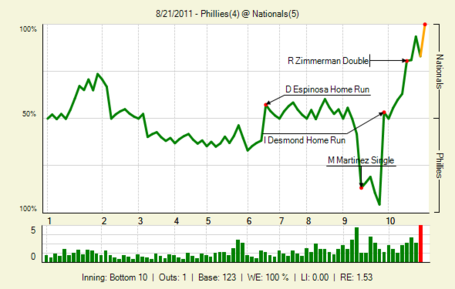