Nothing like a night with the Mets to work out the frustrations of a bad weekend on the road.

The Phillies piled on early and often, knocking Mets starter Dillon Gee out in the fourth inning on eight runs. The Phillies would tack on two more, Cliff Lee was ho-hum awesome again, and the Phillies rolled to a 10-0 victory.

The Phillies scored their first three runs in the second inning on an RBI single by Wilson Valdez, filling in for the now deceased Jimmy Rollins, and a two-RBI triple from Shane Victorino. They'd all but put the game away in the third on a line-drive two-run home run from John Mayberry, his 11th of the year in what's turning into a breakout campaign for the 27 year old. The Phillies would score three more in the fourth on a bases loaded walk to Mayberry, and a two-run single from Carlos Ruiz. Hunter Pence's two-run bomb in the sixth was the (merciful) end to the Phillies scoring for the evening.

Lee was terrific again, throwing seven innings and striking out seven, allowing three hits and walking three. He threw 105 pitches, and give Charlie Manuel credit -- a 10-0 lead was deemed safe enough to pull his pricey starting pitcher at a reasonable pitch level despite the complete game shutout still being in play. David Herndon, history's greatest monster, pitched two scoreless innings, allowing two hits and inducing a couple of double plays, to wrap this thing up. 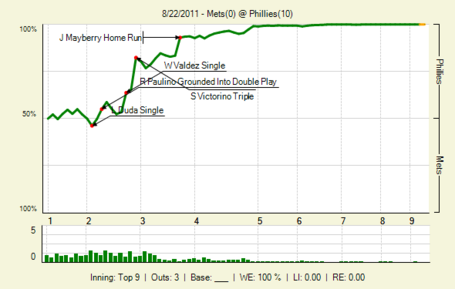