In a three hour, forty-one minute slopfest (the longest nine inning game of the Phillies season), lots of stuff went wrong. The Phillies fell to the Mets, 7-4.

Take the first inning, for instance. After allowing a leadoff single to Angel Pagan, Phillies starter Kyle Kendrick seemed to have neutralized the threat on a dead double player grounder off the bat of Ruben Tejada. Alas, not to bed -- interim shortstop Michael Martinez bobbled the ball, got no outs, and the Mets would go on to plate four runs in the inning, including a two out, three run home run from Nick Evans. Yeah.

The Phillies had to play catch-up the rest of the day, and while they threatened, they could never quite tie the game. They scored three runs in the bottom of the second, but would quickly see the Mets lead expand to 5-3 on a solo home run from David Wright leading off the third.

The Mets would extend the lead to 6-3 with a David Wright sacrifice fly in the fourth, and to 7-3 on a Nick Evans RBI double in the fifth.

The Phillies would score their final run in the seventh on an RBI single from Hunter Pence.

The pitching was pretty putrid across the board, with the best outing being turned in by Ryan Madson, who allowed a single hit in his ninth inning "get some work in" appearance.  The defense was rotten too, and while the Mets committed three errors, it was the Martinez error in the first that proved most costly.

Pending the outcome of tonight's game, the Phillies currently sit seven games up in the loss column in the National League East. 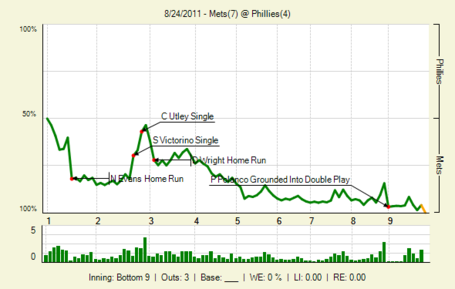