Didn't watch LOL but I understand the following things happened:

Roy Oswalt's velocity was back down to his pre-Washington levels around, 90-91 MPH. Not a great sign.

Probably not coincidentally, he was knocked around for 12 hits in 5 2/3 innings, striking out just two.

Greg Dobbs is a treacherous fink.

Can someone let me know if Wilson Valdez admired his home run? Love when he does that.

John Mayberry kinda sucks again and should be traded because he didn't hit a single home run tonight, including in the bottom of the eighth with two outs representing to go-ahead run. He struck out.

Nice to see Ryan Howard hit another home run off a lefty.

But probably the most important development of the evening? Chris Capuano of the Mets striking out 13 Braves and allowing only two hits in a complete game shutout. Capuano's Game Score of 96 was the best in MLB this season, and kept the Phillies lead in the all-important loss column at eight games. 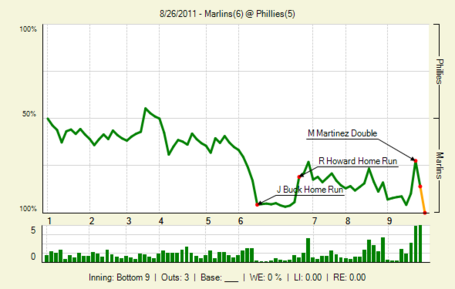