Share All sharing options for: Cole and Shane Bring the Pain: Phillies 3, Reds 2

Shane Victorino continued making a case for his nascent MVP candidacy, ripping a two run home run in the eighth inning, putting the Phillies ahead after a strong return to the rotation from Cole Hamels, as the Phillies topped the Reds by a score of 3-2 tonight in Cincinnati.

The opening frames were dominated by pitching, with Homer Bailey and Hamels each completing one turn through the opposing lineup without allowing a baserunner. Each allowed his first hit in the fourth inning, both on defensive miscues -- the Phillies' on a misplayed grounder in the hole by Brandon Phillips off the bat of Chase Utley, the Reds' on a bizarre stumble in right field by Hunter Pence that resulted in a triple for Brandon Phillips, who would then score on a groundout by Joey Votto.

The Phillies would strike back in the fifth on an RBI double by Wilson Valdez, once again misplayed by Reds left fielder and New Guy in Town Dave Sappelt.

Hamels would complete six innings and was pulled from the game after 76 pitches, much to his own consternation; the left-hander was seen sharing some tense words with Charlie Manuel in the dugout. Still, he allowed just two hits, one (barely) earned run, striking out seven and walking none. His velocity was on the low side, sitting around 90-91 rather than 92-94, but he mixed in his offspeed and breaking stuff, locating all his pitches well.

The score would remain tied at one run apiece until the eighth inning, when Shane Victorino struck a two-run home run to right field to put the Phillies up 3-1. The Reds would strike in the bottom of the eighth, exploiting a couple of miscues by the Phillies' defense -- a misplayed hard grounder by Placido Polanco, and another bad throw from Polanco allowing the second run to score -- but Mike Stutes was able to get defending MVP Joey Votto to ground out to end the threat.

After allowing a leadoff hit to Jay Bruce in the bottom of the ninth, Ryan Madson was able to retire the next three batters. 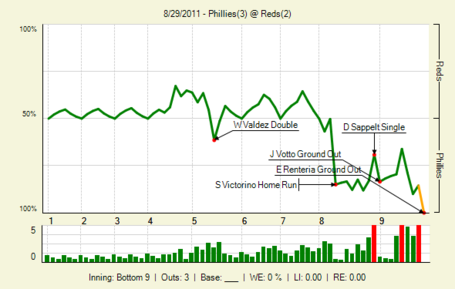