Share All sharing options for: Night of the Living Run Differentials: Phillies 9, Reds 0

For the first five innings, tonight's contest appeared to have all of the trappings of a pitchers' duel, not unlike last night's low-scoring affair. Phillies ace di tutti aces Roy Halladay and Reds guy Bronson Arroyo traded zeroes for the first three frames. But Bronson Arroyo is a pitcher who doesn't strike many people out and doesn't do a very good job of keeping the ball in the ballpark. The wise bet was that he would break first.

In the fourth, it was Arroyo's tendency to give up home runs that bit him. Chase Utley drew a one out walk and Ryan Howard hit what appeared at first to be a high popout right that kept drifting and drifting and drifting until it drifted far enough to put the Phillies up 2-0. Then, in the sixth, Hunter Pence got the real party started with a solo homer to deep center on a pitch that was somewhere between his nipples and his nose. Wheels wasn't in the booth at the time, but I swear to you I could hear that distinctive cat-in-heat sound in the background.

After that, the game turned into a lesson in the perils of pitching to contact. Raul Ibanez and Carlos Ruiz smacked back-to-back singles to put men on first and second for Wilson Valdez, who was robbed of a GIDP by former Phillies superstar Miguel Cairo. With the pouches now engorged and a chance to blow things wide open, Roy Halladay stepped to the plate. Now, Roy Halladay is not a very good hitter, so to most pitchers this would not seem like a very grave situation. But as I've already said, Bronson Arroyo does not miss many bats, and in this case Roy Halladay's bat was one of the bats he did not miss. Doc swung at the first pitch and the ball was scorched down the right field line for a bases-clearing double to put the Philllies up 6-0 and to push their win probability into the 99 percent zone.

As it turns out, Roy Halladay really only needed one of the three runs he drove in himself. He had everything working tonight, as he yet again set down numerous Reds hitters in order--17 hitters between the first and the seventh, to be precise. He only encountered real trouble once, in the seventh, when he loaded the bases with one out on a Joey Votto double, a Jay Bruce HBP, and a Drew Stubbs walk. Harm was avoided because Doc has a glandular disorder that results in his body producing quantities of guile that would be unsafe to most species on the planet; he struck out Todd Frazier and got Ryan Hanigan to ground out to end the threat. Roy's final line: 7 IP, 2 H, 0 R, 2 BB, 9 K.

The Phils tacked on two runs in the seventh, on a homer by Raul Ibanez, and one in the ninth on Ryan Howard's second blast of the night. Brad Lidge pitched a scoreless eighth and the Bear Jew (who was demoted after the game) finished off the shutout. 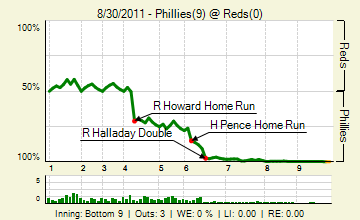