Cliff Lee all but sewed up another National League Pitcher of the Month Award with 8 2/3 dazzing innings tonight, as the Phillies went on to blank Dontrelle Willis and the Cincinnati Reds by a score of 3-0.

After surrendering loud line drive outs to the first two Reds batters, Lee settled in and continued his amazing August run, striking out seven and allowing just six hits and a walk in 8 2/3. Lee came so very close to yet another complete game shutout, retiring the first two Reds batters in the ninth before allowing a double to Joey Votto, walking Jay Bruce, and hitting Miguel Cairo with a pitch to load the bases. With 117 pitches, Charlie Manuel had seen enough, summoning Ryan Madson from the 'pen, who promptly induced a foul pop from Yonder Alonso to end the game and cement the Phillies' 86th victory of the season.

The Phillies scored early, plating a run in the first without a hit after consecutive walks from Dontrelle Willis to Shane Victorino and Placido Polanco, with Victorino advancing and scoring on fielder's choice groundouts from Chase Utley and Ryan Howard.  They would score their second run in the sixth on a Hunter Pence home run, and their third on another fielder's choice groundout from Chase Utley.

The weirdest moment of the night came in the fourth, with Cliff Lee batting. After Lee topped a grounder to Reds second baseman Brandon Phillips, the world-beating lefty decided that running the ball out wasn't his thing...

I have nothing to add here, but you know where I'm going with this I bet... 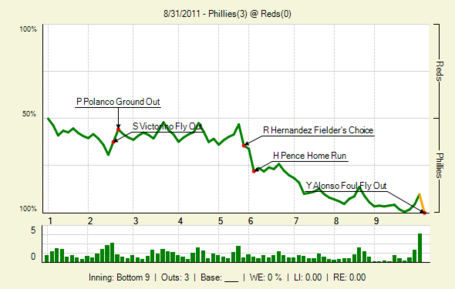