Some Stat Notes to tide us over until the late start (with a few links thrown in).

The Phillies' pitching staff leads the NL (as well as all MLB) in ERA, FIP, and xFIP:

Those are all signficant but not overly substantial leads.  However when we isolate starting rotations, the leads expand considerably in all three stats:

(more after the jump)

- The Phillies staff leads the majors with 15 shutouts this year (Texas is 2nd with 14).  However only 5 of those 15 have been Complete Games.  And all 5 of the CG Shutouts belong to Cliff Lee (and all his CGs are shutouts).  Texas leads in CG Shutouts with 6.
- Lee's 5 CG Shutouts leads MLB (Texas' Derek Holland is 2nd with 4).
- Roy Halladay is arguably having the best season of any starter in at least the NL (leads MLB in FIP, xFIP, and WAR), but this could be only his 2nd season with 15 or more starts in which he doesn't record a shutout.  The other was 2006.

Below are each starter's Game Scores, ordered from highest to lowest.  Note Halladay's and Cole Hamels' more consistent lines, compared to Lee's steeper one, with excellent games at left, and not so excellent at right. 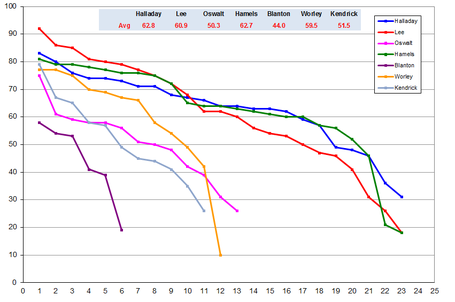 Is Ben Francisco in danger of losing a roster spot? | The Phillies Zone | 08/05/2011
"And for Francisco, a player who thought he was on the precipice of something special — finally, he had a chance — it's a depressing realization."

Phillies Hope To Re-Sign Jimmy Rollins: MLB Rumors - MLBTradeRumors.com
"The Phillies’ general manager expressed optimism about reaching a new deal with his shortstop after the season."

Ode de Stairs: The exploits of a legend
Poetic take.