Share All sharing options for: The Good Fight: Phillies 9, Giants 2

It had been brewing for awhile, but the building tension between the Giants and Phillies finally came to a head tonight in San Francisco, with benches clearing in the sixth inning after Giants reliever Ramon Ramirez drilled Shane Victorino in the back with the score sitting at 8-2 Phillies. Ramirez and Victorino, along with Giants catcher Eli Whiteside, who tackled Placido Polanco in the ensuing scrum, were ejected, and face likely suspension upon review by the League. Link to the video here!  Also go here to Zoo With Roy for a handy .gif, and a nice photo of pube-head Eli Whiteside. Video after the jump, at least until MLB rips it off YouTube.

Victorino didn't take the incident very well, shoving the umpire in an attempt to get back into the pile. The exact origin of this particular beef is unclear, but it looked like Victorino flipped his bat after a solo home run in the fourth inning. In any event, the Giants were real mad for some reason!

So anyway, the game! Vance Worley had another great outing, going seven innings and allowing two runs, striking out six and walking just one. Giants starter Jonathan Sanchez was, well... Jonathan Sanchez -- 4.2 innings, seven hits, and five runs, including Victorino's solo shot, and a two run blast by John Mayberry Jr. in the fourth that put the Phillies up 4-1. Mayberry has truly emerged as a viable fourth outfielder of late, or a possible nice trading chip.

New Phillie Hunter Pence also went deep in the seventh inning, a long solo blast that made the score 9-2, where it'd remain.

Each Phillies' starter had at least one hit, including Worley. With the two hits, including the home run, off Sanchez, Victorino's OPS versus lefties is probably up around a jillion now.

With the victory tonight, the Phillies have guaranteed themselves at worst a series split, and with Tim Lincecum and Matt Cain pitching on Saturday and Sunday, it's nice to have those wins in the pocket. 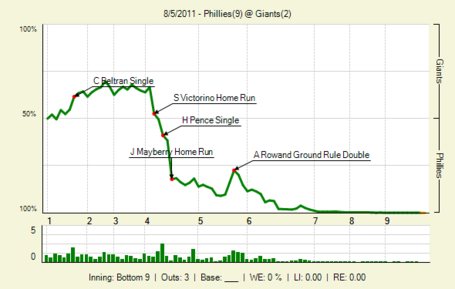