Sometimes your date has a zit.  Instead of a perfectly clear complexion, as though bathed daily in buttermilk or the milk of human kindness, there's an awkward little blemish. Or a scratch from a Panda.  You still go out, you have a great dinner, see a wonderful performance of Mahler's Fifth Symphony, you drive home under a clear sky and a harvest moon in your convertible, and you get invited in for a drink.  In years hence, you don't remember the zit, just the perfect night and the dream date.  Phillies fans had a dream date with our favorite dreamboat today.  Don't let the Panda tell you otherwise.

The game was played crisply, quickly, and in beautiful conditions.  The pitching matchup did not disappoint, as it produced a game score of 76...for the losing pitcher, Matt Cain.  Hamels had a game score of 74 for his complete game win, marred only slightly by the 9th inning solo shot by Pablo Sandoval as Hamels was trying to close out the game.  It was the only run by the Giants.

The Phillies struck in the top of the first.  Rollins doubled off the wall in right.  Rather than hitting Shane Victorino, Cain induced a harmless fly ball out.  Chase Utley worked a walk, and Ryan Howard struck out for the first of many times.  Hunter Pence ignored his duty to regress for yet another day, resulting in this case in an especially gritty 2-out RBI single that plated Rollins for the first run of the day.  Utley should have been out on the play trying to advance to third, but the Panda forgot to Kung his Fu when receiving the throw from Carlos Beltran.  Beltran got an assist, Utley got third, and the Panda got an error.  During the next at-bat, a passed ball allowed Utley to score the second, and final, run for the Phillies.  And the game was over, because Hamels was on the mound, and on his game.

To be sure, there were highlights aside from the scoring plays recapped above, but the bulk of the game was a succession of 6 - 3 putouts for both teams.  Hamels did occasionally allow one (and even two) baserunners at times, but he escaped trouble with two double plays behind him.  The most serious threat came in the 4th following Aaron Rowand and Jeff Keppinger singles with none out.  Hamels struck out Beltran on three pitches and induced a double play from the Panda to end the threat.

Hamels had only 5 strikeouts, but walked none.  He threw a humane 114 pitches, 83 for strikes, to achieve the result.  The only XBH was the solo homer to Sandoval.  He threw first-pitch strikes to 28 of 32 hitters (this was the Fox stat of the day, evidently).  The Phillies jumped on the Giants early today, and Hamels never took his foot off their neck.

Yes Cole, you had a zit today, but like Marilyn's mole (Monroe, not Manson), it just added character. And for the Giants, it was Frownland all the way. 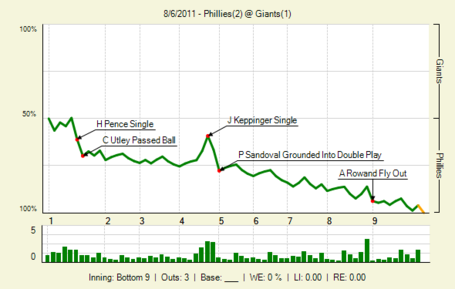