Share All sharing options for: All Good Things: Giants 3, Phillies 1

The Phillies winning streak came to a halt at nine games, as Tim Lincecum pitched 7 2/3 solid innings to propel the Giants over a rusty Roy Oswalt by a score of 3-1.

The Giants battered Oswalt to the tune of 12 hits in six innings, but only managed three runs thanks to some poor baserunning, a heads-up play by Carlos Ruiz at home plate, and an overall lack of pop. Oswalt struck out four and walked two. Although his velocity was sitting around 91-92 for most of the game, the righty exhibited many of the problems he was having prior to his disabled list stint. While the Giants never had a "big inning," they had Oswalt pitching in trouble pretty much all day, scoring single runs in the fourth, fifth, and sixth innings.

The Phillies scored their first and only run in the third inning on a two out RBI single by Chase Utley, scoring Roy Oswalt from second base.

Hunter Pence failed to get a hit for the first time since joining the Phillies, going 0-for-4. Here I thought this guy was supposed to be good.

Ryan Howard went 0-for-4 and struck out three times. Three of Lincecum's five strikeouts game against the Big Piece.

Despite today's loss, the Phillies still took the season series from the Giants, four games to three, and await a possible postseason matchup. 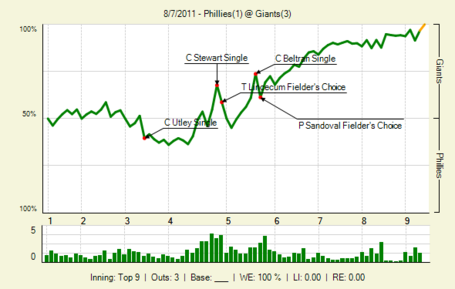