Share All sharing options for: Phillies 5, Dodgers 3: Susplendid ISOlation OR The Strange Appeal of Shane Victorino

With the threat of a multi-game suspension hanging over his head, Shane Victorino attacked the baseball tonight in Los Angeles like it was the last two hours at his desk before a week-long vacation. Victorino went 3 for 5, scoring three runs and providing a critical solo insurance home run in the ninth after the Dodgers had crept to within one run.

The win was the 75th for the Phillies this season, which ties their season-long record for wins with the 1998 season, and Roy Halladay won his 15th game of the season, the same total, interestingly enough, that Curt Schilling had all that year. Goddamn, that team was unwiped butt-awful. I mean, really. Trotting out Rico Brogna. Mark Lewis, Desi Relaford, Gregg Jeffries ever night? Who the hell were they kidding? But I digress this close to 2 a.m.

The Phillies got out to an early 3-0 lead, but it was hardly smooth sailing for Halladay, who was beset by Dodgers baserunners throughout the game, recording only one 1-2-3 inning in the fourth. Like yesterday afternoon's game in San Francisco, it was mostly a singles parade. Fortunately for Halladay, the Dodgers were woeful at knocking runners in from scoring position. Halladay left with one out in the seventh, before Antonio Bastardo came on in relief and got Andre Ethier to ground into a double-play.

But it was as though Charlie Manuel ad libbed when he decided to take Halladay out "so early." Despite the fact that Bastardo only threw five pitches, he used Ross Gload to bat for him in the top of the eighth with nobody on and two out. In the bottom of the eighth, the magic pixie dust that had graced the luscious finger-ready locks of Michael Stutes' hair blew away in a Santa Ana zephyr, and the Dodgers paraded around the bases to pull within 4-3. But out came Brad Lidge with a sphincter-twisting two-out performance to close the inning, aided immeasurably by Tony Gwynn, Jr.'s decision to bunt his way on. Whatevs, bud. For that you get a one-way ticket to Palookaville from the front office of Team Wet Luzinski.

Oh, and it's a heck of an umpire crew. We'll say hi to Scott Barry in force tomorrow night. For tonight (what's left of it), this is for you, Shane: 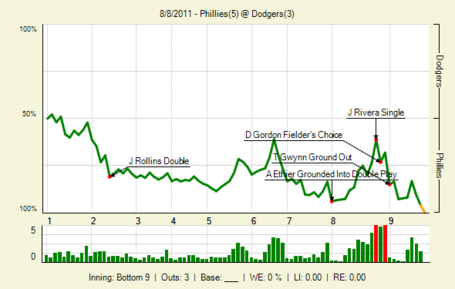