Share All sharing options for: Hits and Beer: Phillies 3, Brewers 2

Big hits on the Phillies, but not so many with the bat.  Catcher Carlos Ruiz took an elbow from Casey McGehee on a close play at the plate, but came through like the champ he is.  Cliff Lee, while trying to lay down a sacrifice bunt in the third, was struck in the left hand by a pitch. He appeared to be hurt, but shook it off and stayed in the game and remained effective, pitching seven innings and striking out seven, allowing two runs to the Brewers en route to a 3-2 Phillies victory.

Hunter Pence struck first in the first inning with a solo home run.  They scored their second run on a Placido Polanco solo home run in the fifth. Yeah you read that right.

The Phillies would score the go-ahead run in the top of the ninth tenth on an ill-advised throw from Brewers pitcher LaTroy Hawkins on a Carlos Ruiz sacrifice bunt attempt, scoring Raul Ibanez from second base after his lead-off double.  Interestingly, "LaTroy" is French for "man who cannot throw."

Ryan Madson looked a little rough around the edges in the ninth tenth, walking two (albeit one was an intentional walk to Prince Fielder), but came away with the Save. 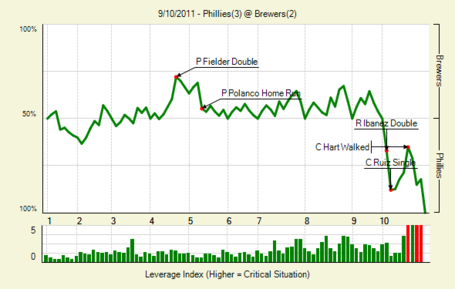