The Phillies' playoff death march of death was forestalled by one day as the Milwaukee Brewers staved off a four game home sweep behind a strong pitching performance from Yovani Gallardo.

For the first five innings, Gallardo utterly dominated the Phillies still-depleted lineup to the tune of one hit and nine strikeouts. There's no more shame in that than there was in the Brewers being shut down on consecutive days by Cole Hamels, Roy Halladay, and Cliff Lee -- all four are excellent pitchers.

Still, after six innings today, the Phillies were on top in this one and appeared poised to clinch their fifth playoff berth in a row. In the top of the sixth, Gallardo showed his first signs of being human when he allowed a leadoff homer to Shane Victorino and a two-out solo blast to Ryan Howard. That would be all the Phillies could muster, however, and Gallardo departed after seven with a snazzy line of 3 H, 2 ER, 1 BB, and 12 K.

On the other side, Vance Worley was very good yet again. Worley battled to hold the potent Brewers bats to just one run through six innings, but was unable to hold the lead in the seventh as they mounted a two out mini-rally. Corey Hart started things with a double down the line in left and lovable psychopath Nyjer Morgan drove him in with a double in the right-centerfield gap. Worley appeared to have Ryan Braun struck out on a fastball that caught the inside corner, but Gerry Davis wasn't looking and gave Braun another chance, which was poked into right field for the go-ahead run.

The Brewers' bullpen held and the Phillies lost 3-2.

-The Phillies concluded a 6-1 week against two teams that are virtual locks for the playoffs. Cool.

-Or maybe not...The Braves lost to the Cardinals again today, cutting their Wild Card lead to 4.5 games. The Phillies division lead remains at 12 games. For the Braves, that's eight losses in their last 11 games.

-The Phillies now head down to Houston for a three game set. It will be nice to play a late-season series against the Astros without having to worry about how the inevitable sweep will affect their playoff chances. 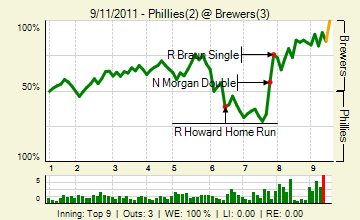