As if by the powers of some evil Texas warlocks, the Phillies always seem to drop games in Houston late in the season. Apparently, even when the Astros are as godawful putrid as they are this season, and the Phillies are on their way to 100-plus victories.

The Phillies had a "dancing bears" kind of game, with multiple miscues in the field leading to a handful of Astros runs, and prodigal Phillies asshole Brett Myers kept the offense in check to the tune of a 5-1 Astros victory in game one of this three game series.  Myers would go eight strong innings, allowing just the single run on six hits.

Roy Oswalt once again looked less like the "ace" he was in the past, allowing 11 hits and five "earned" runs in seven innings, striking out just two.  The Astros would score their first two runs in the fourth on some creative defense on a soft fly/liner to left that was bungled by Raul Ibanez, and a misplayed grounder up the middle due to some Jimmy Rollins / Pete Orr miscommunication on what could have been a double play ball.  Innings like this one are why stat-types like to discount Earned Run Average as a function of official scorer idiocy vis-a-vis errors.  Two runs also scored on a big Carlos Lee home run with two outs in the fifth.

In good news, Joe Blanton pitched a scoreless eighth inning in his first appearance since May, striking out one and allowing one hit.

In other good news, the Braves and Cardinals lost, cutting the Phillies' magic number for the NL East to five, and a playoff spot to one.

Fangraph of Playing Out the String 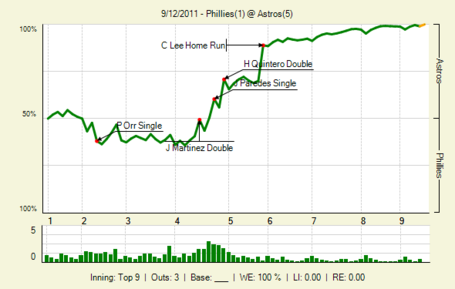