Maybe we should appreciate this. The almost universal excellence of the 2011 Phillies has meant precious few opportunities for a fan base long steeped in self-pity and paranoia to vent its fear and loathing... but this week in Houston, where the best team in baseball has dropped two straight not particularly close contests to the worst team in the game, fits the bill. That the Astros have won these two games behind ex-Phillie starting pitchers Brett Myers and J.A. Happ, who came into the series with a combined record of 9-28, is just salt in the wound. After all, it was just two years ago when Myers and Happ were members of a Phillies team en route to its third straight NL East title, the Astros were barely more relevant than they are now, and Houston swept a September series at home.

In all likelihood, the details of tonight's loss are quite inconsequential. Cole Hamels got into and out of trouble in the first inning, allowing one run on back to back doubles by Clint Barmes and J.D. Martinez. He stranded men in scoring position in each of the next two innings, and former Astro Hunter Pence tied the game at 1 with a solo homer off Happ in the fourth. Then the roof fell in: with one out and someone called J.B. Shuck on second, Happ bounced a grounder to the right side that Ryan Howard couldn't field; instead of a man on third and two outs, the Astros had runners on the corners with one gone. Jason Bourgeois singled through the hole on the left side to score Shuck, and Barmes followed with a three-run homer that put Houston up 5-1.

The Phils showed brief signs of life in the following half-inning, as Jimmy Rollins singled with two outs and Happ issued walks to Placido Polanco and Pence. Howard worked the count full, then flied out to the wall in left. That was their last base runner until Carlos Ruiz hit a solo homer in the ninth. 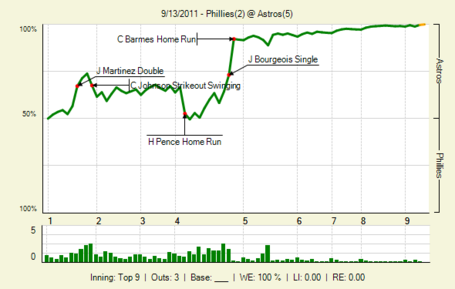