For the fifth time in five years, the Phillies will be in the playoffs.  They best their record of four appearances in four years . . . set last year.  Folks, these are the glory days of this franchise.  It's impossible to understate that.  Tell anyone who tries to downplay that fact that they are misanthropes who are better suited for rooting for the late-80s or late-90s version of this franchise.  They don't deserve this team.

And they certainly don't deserve Roy Halladay.  Today, he took Cliff Lee's Cy Young bid and upped the ante.  With the team suffering its first prolonged (three games or more) losing streak in months, Halladay halted that all by himself - shutting out the Astros in a complete game.  Unbelievably, this is Halladay's first complete game shutout of the year, despite having 7 previous complete games.

The Phils' only run, the only run of the game, came from the first two batters of the game - a Shane Victorino double followed by a Placido Polanco single.  Neither team mustered another run for the rest of the game.  With Halladay on the mound, it didn't matter for the Phils.

Fangraph of playoff glory below: 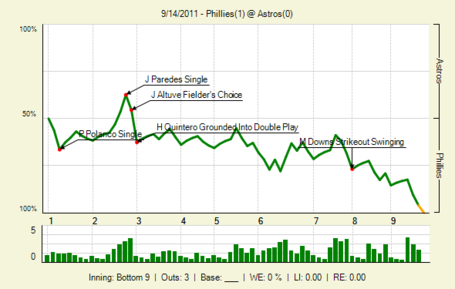