This recap would be unjust without some sort of prologue: On August 27, with Hurricane Irene bearing down on the greater tri-state area, the Phillies stubbornly held onto their plan, set two days earlier, to try to sneak in the Sunday game on the Saturday afternoon before the deluge hit. An early wave of thunderstorms washed over the area as the family Wet Luzinski piled in the car in a vain attempt to see a Saturday game with Roy Halladay on the mound. And there was a Cliff Lee back to school bag giveaway. It had to happen. And so it did. Bags were procured, and once inside the gate, the game was postponed until September 15. (Hold onto your parking receipts btw. You can use them for the makeup. Good to know!)

From there, all was askew. The storm blew through. The electricity went out for a few days. And the zipper on one of the kids' bags was busted. And for those of  you with two kids, this meant only one thing: Unfinished business. And a lame excuse to the school secretary about a forgotten "follow-up appointment."

And yet, the strange swirl that was Hurricane Irene couldn't seem to shake free of this game. Instead of a pleasant surprise, the older boy was upset and wanted to stay in school. The weather remained calamitous, as the afternoon began breezy and tropical, with showery showers, and ended in a cold, full force northerly gale blowing straight down Broad Street. And instead of Roy Halladay on the mound, the Phillies plugged in Prodigal Starter(TM) Kyle Kendrick to pitch the first part of this jerry-rigged day-night doubleheader against the String-Playing Ensemble known as the Florida Marlins.

Into all of this out-of-kilterness, with a strange 2:35 p.m. start time, stepped Kendrick, who promptly started the game with four innings of no-hit baseball, in which he struck out four and pitched to only one extra batter, catcher John Buck, whom he hit with a pitch.

The Phillies' offense, meanwhile, jumped on Marlins starter Anibal Sanchez for two runs in the bottom of the first, as Hunter Pence and Raul Ibanez smacked doubles off the left and right field walls, respectively. The offense then disappeared entirely, as Sanchez bucketed along through the end of the sixth inning, striking out seven Phillies and walking only one. Aside from dodging raindrops, the game sailed along nappingly, the only in-stadium entertainment being a painfully awkward Phanavision moment before the third inning, when a boyfriend surprised his gal with some tongue for the KissCam. Now, I'm not a betting man, but my hunch is this relationship won't make the beginning of the weekend, much less the end of it.

Tweetmaster Logan Morrison spoiled everything for Kendrick when he led off the fifth inning with a home run on a full count from Kendrick, who then recovered to finish out the fifth with two more strikeouts (six in all!), and concluded his day, presumably, to have his urine collected by the training staff in order to develop a powerful bullpen musk for use in the playoffs.

There appears to be a need, as borderline, dead-armed, sketchy bullpennery ensued. Ryan Webb relieved Sanchez  in the seventh, and greeted the bottom of the Phillies lineup with a pair of singles (one, in the pinch, by Chase Utley in his first plate appearance since his concussion) and a pair of walks, the last by Placido Polanco, which drove in a run and gave the Phillies a 3-1 lead.

And a word or two about Polanco and the Phillies' defense, which featured Michael Martinez at short and Pete Orr at second: wonderfully done, chaps! Orr robbed Anibal Sanchez with a snow-coned catch of a dying quail in short right field, and Polanco robbed pinch hitter Jose Lopez in the seventh with a swell pick of a well-struck grounder to end the inning.

But the Marlins, despite their losingfulness, also cannot shake their own inner peskiness, and put runners on in each of the last three innings. The most thrilling play came in the top of the eighth, when none other than flamethrowing trebucheter Raul Ibanez threw out Omar Infante after Gaby Sanchez hit a single off reliever Brad Lidge, after Antonio Bastardo (who this afternoon sailed into the Sea of Dead-Armed Worry) started the inning with a hard hit ball to center and a double to start the inning. Lidge meandered, improbably, through the eighth.

Ryan Madson closed the game in the ninth, again with pesky Fish baserunners, as the summer winds of 2011 officially blew out past the boardwalks of New Jersey and ushered in the string portion of our season, when long shadows and long sleeves blossom, cosseted under tomato-red jackets. My, that was florid. But the magic number now stands at three.

Schoolhouse Rock - Three is a Magic Number (via AIRNSWORDZ) 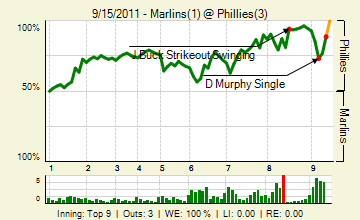